Skip to content
This is some sample text.
Learn More
Sharing a couple of scrapbook layouts today!  Yes.  You heard me.  Its been a while, right?  It is harder than ever for me to fit in time for scrapbooking, but a couple of weeks ago when I mentioned taking the night off from blogging to do some layouts for Kole’s book it felt so good.  I miss it!  And I decided I’m going to have to make it a priority to find some time.  Even if it’s only enough time for a layout or two a month.  I am so behind on my girls’ albums and poor Kole only has a handful of pages for his baby album.  I had no clue where to even start!  So I just decided to start with Kole’s one year old birthday.  I set a goal.  A really simple goal for this year because we are so busy with the new house.  My goal is to catch up and stay caught up with Kole’s album (starting at age one).  Someday when he is in preschool and I have a little more time I can go back to complete his baby book (birth to age 1) and I can work on catching up the girls’ albums.  This should be attainable because I’m keeping things simple and not scrapbooking every single picture I’ve taken of the little dude (or even 1/3 of them).  As you know I’ve taken a lot.  :) 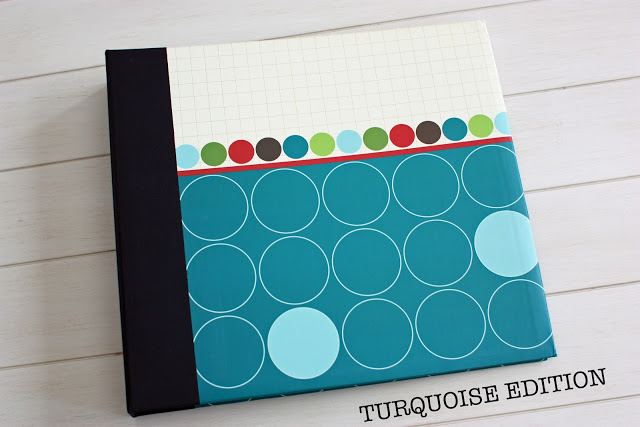 A while ago I ordered the Turquoise Edition of Project Life.  Since then Becky has come out with a newer binder that I’m tempted to get!  (Smaller binding and a side label this album doesn’t have.)  But whether I stick with the old binder or get the new one, this is the kit I’m using for Kole’s album starting at year one.
First layout of his one year old birthday party… 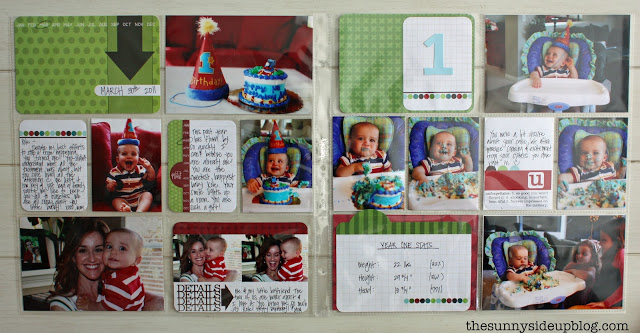 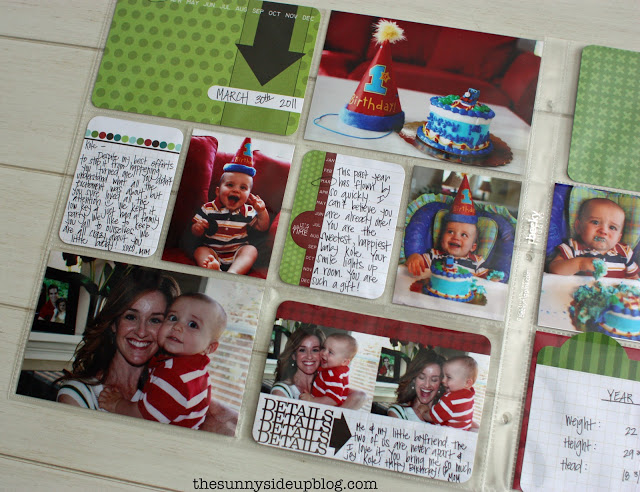 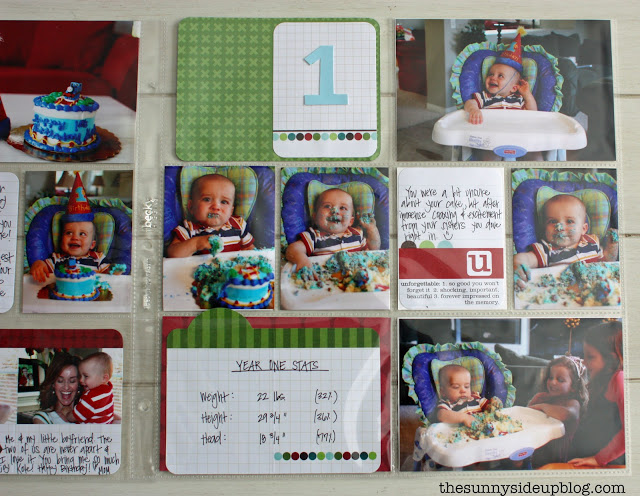 The blue number one I cut out from one of his birthday cards. 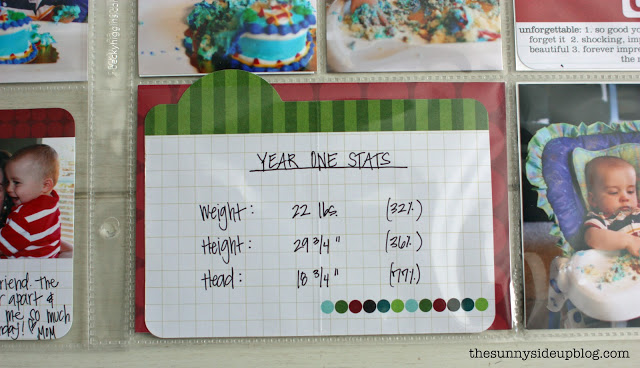 I had an extra 4×6 slot so I used a large journaling card to display his year one stats.  All of my babies had huge heads!  They get it from Kenny.  I’d say it’s because they are all so smart, but I have a small head so I’m not going to say that.  Even though I just did.  I do have big hair though – does that count?

I still need to print out this post to add to his album with his birthday layout.  It’s written by Kole himself so I think it’s an important addition.  :) 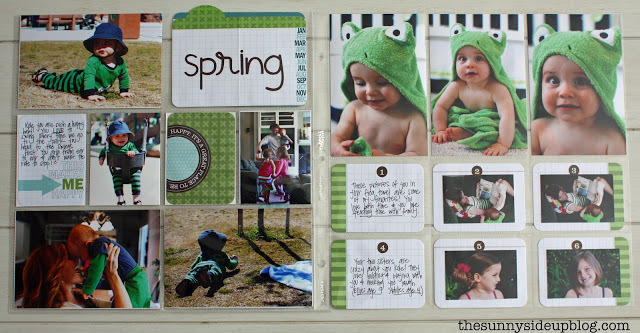 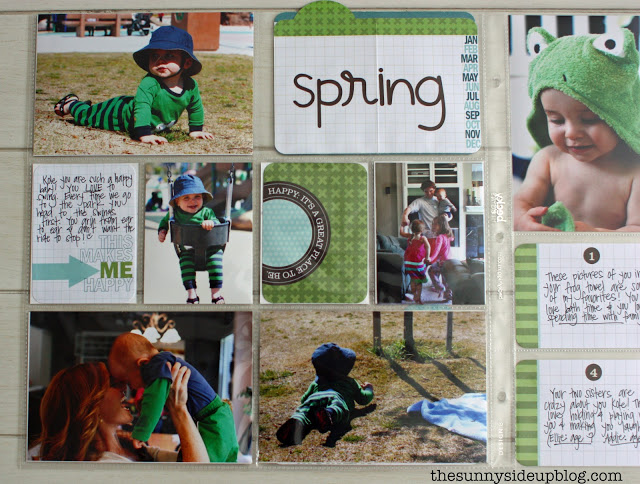 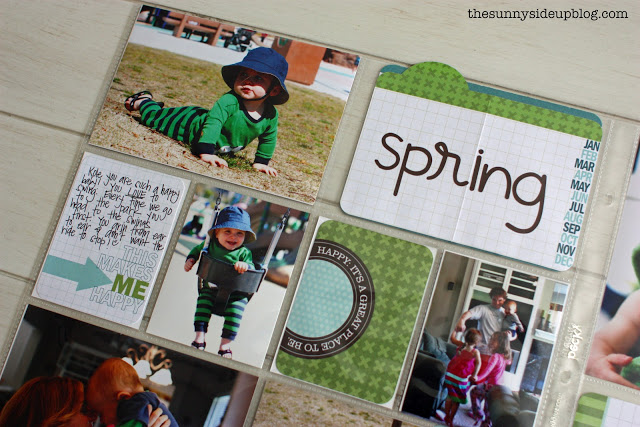 This boy still LOVES to swing!
I spelled out “spring” with just some random stickers I had on hand. 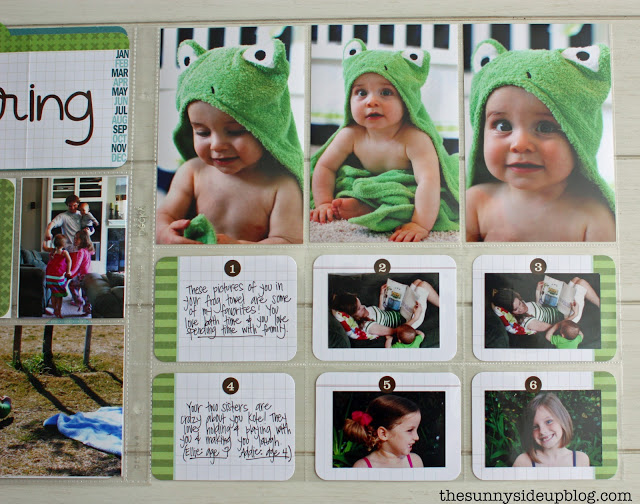 These pictures of him in his frog towel are some of my favorites so I didn’t want to shrink them down to 4×3 like I do with most of my vertical pictures.  So I ordered some new page protectors (Design B) with the large vertical 4×6 slots.  Perfect!

Then below I just turned the journaling cards the other way and attached some smaller pics.
Simple.  Easy.  DONE.
My favorite kind of scrapbooking these days.
Hope it won’t be another year before I share more!
Enjoy your week everyone!
xoxo, Erin
Share
Leave A Comment
Share The Post
Join the Conversation
Cancel reply

And the toddler strikes again