Skip to content
This is some sample text.
Learn More
My brain is officially fried.  Kenny and I spent 5 hours this afternoon with our builder and window guy.  To continue the 4 hour meeting we had yesterday.  Which was a continuation of the 6 hour meeting from a few days before.  And you know what?  We aren’t even half way finished with exterior windows and doors!  We haven’t even made it to the fun part yet where I get to pick out styles!  We have been going room by room and determining exact size, which way the windows/doors will open, and (for me) discovering all sorts of things about my floor plan that I didn’t realize before… – Oh!  I’m going to need a 15 foot ladder to plant flowers in that flower box.  Maybe that’s not the best location for one.  Come to think of it, maybe my architect already told me that and I chose to ignore him because all I could think about was how pretty some purple petunias would look in that window.  :)
Anyway!  Despite the mummy like state I am constantly walking around in with so many house decisions still left to make, I feel really excited about the things I have decided on!  Here is a peek of a few things I am including in the new house…
{DUTCH DOOR} 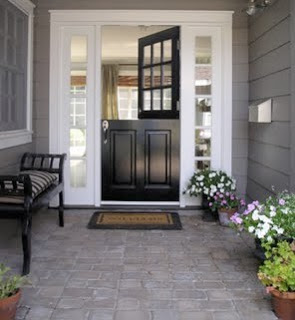 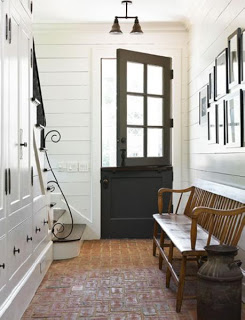 (decorpad.com)
I have been having a love affair with dutch doors for some time now.  I absolutely adore them and I  wanted one so badly!  Aside from the look and overall charm they add to a space, I love the idea of opening the top half of the door to let in the ocean breeze or watch my kids while they play outside.  When we were working on designing the mudroom with our architect, I sent him this picture: 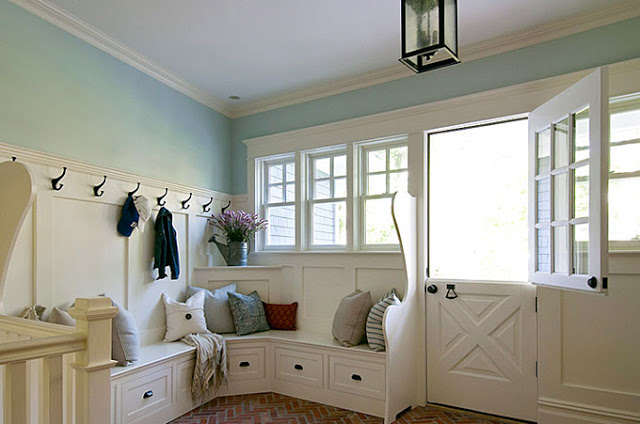 I told him I loved this look and for sure wanted a dutch door in my mudroom coming in off of the front porch, but I also wanted lots of space for lockers/cubbies for the kids.  We initially had the dutch door in the plans, but then a few weeks later we took it out so that I would have more storage space.  Until three days ago when I put it back in.  :)  I couldn’t stop thinking about it!  One of those things I really wanted and I finally decided it was more important to me than extra storage.  I still have plenty of room to do what I want to do for the kids in the mudroom so it worked out great.  And I’m so excited about this door!  I haven’t decided what color it will be – white, black, grey, or maybe something really bright and fun?  Kenny is excited too.  Last week he said “are you still talking about that dutch door!?  Enough already! Put it back in!”  So I guess he’s less excited about the door and more excited that I won’t be discussing it anymore, but regardless, we both got what we wanted in the end.  :) 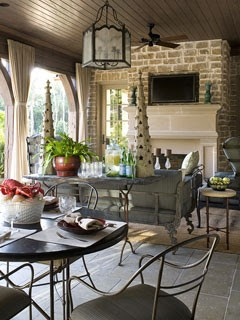 (myhomeideas.com)
We have a fun outdoor entertaining area coming off of the french doors in the family room.  It’s a covered patio with a fireplace similar to the picture above.  The last few days we have debated installing the lift and slide doors (we have doors that come off of our living room and into this outdoor patio).   The lift and slide doors are so cool.  They slide right into the wall so your indoor/outdoor area becomes one big room.  But tonight we finally decided to stick with the french doors because they are more compatible with the style of our home.  Plus they cost less.  Always a bonus!
{STYLE}
Speaking of style!  I love two styles of homes: Nantucket/Cape Cod and French Country.  When we first started designing the house I was trying to combine both styles, but as the house progressed, it turned into more and more of a Nantucket look.  Guess that style is my ultimate favorite!  I could never find an exact picture of what I wanted for the exterior, so I sent my architect individual pics of everything.  I sent him SO many pictures:  love this door, love these windows, love this siding, etc.  It has been so fun seeing everything I love come together to create a home!  This is one of the pictures I sent him for inspiration and our house has several similarities… 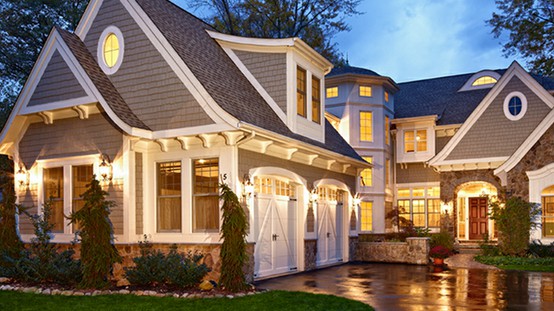 Isn’t this home beautiful!?  This is exactly how our garages will stick out from the house only ours are on the right side of the house where the garages in this picture are on the left (looking head on).  Just like this picture, we will pull into our garages on the inside.  This made the most sense with the shape of our lot. Another thing I love about this house is all of the white molding.  I LOVE white molding and the way it pops against any rock or siding.  I also love the triangle peaks in the roof line (over the front door and over the front garage).  Our house has a lot of peaks/gables in the roof line.  In fact sometimes I worry that I went a little too crazy with the gables!  I don’t think I went too crazy with the white molding though.  In my opinion, one can never have too much white molding.  :) 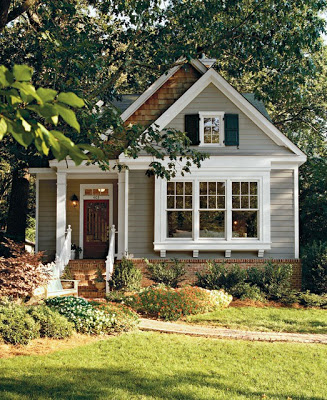 (southernliving.com)
These two pictures show the type of window style that is consistent throughout the house.  LOVE it!!  I haven’t decided how thick I want the lines in the upper part of the windows to be and if there will be six squares (pic above) or three rectangles (pic below).  That will be decided in our next 5 hour window meeting.  (I’m about to ask our babysitter to just move in with us!). 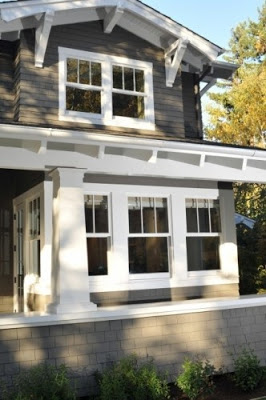 (houzz.com)
{CEILING TREATMENTS}
I haven’t decided exactly what I’m doing for ceilings in the main rooms of the house (a lot of it depends on what we can afford after we see where we’re at with everything else).  But I do know what I want for the family room.  We have a high pitched roof in our family room and this is the look that is penciled in the plans: 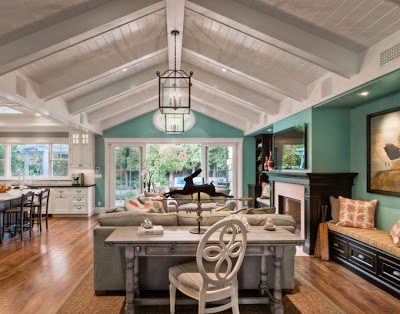 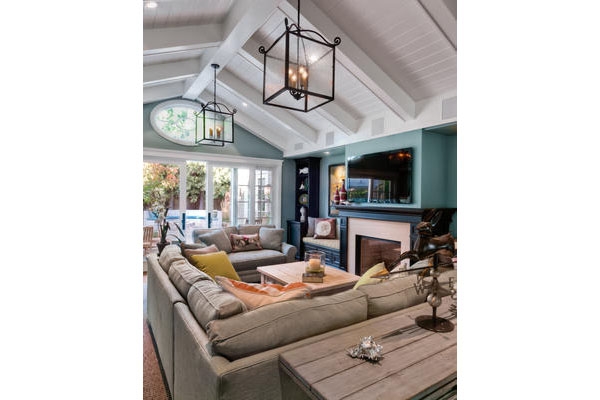 SO pretty!  My mom saw these pictures on-line a few months ago and called me and said “I found a picture of what you’ve been talking about for your ceilings!”  Sure enough, there they were.  It was love at first sight. 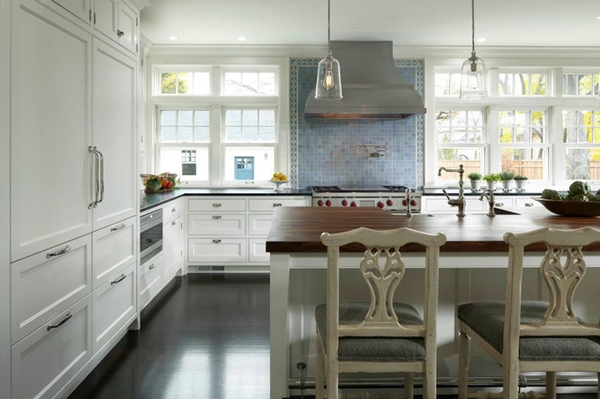 I have gone back and forth so many times on whether or not I should do a stainless steel fridge or cover it so that it blends in with the kitchen cabinets.  After much debate, I’m leaning towards having it blend in with the cabinets like the picture above.  I love the look of stainless, but this will be much more practical so that I’m not cleaning fingerprints every other day like I do now.  But don’t hold me to it, since I have been known to change my mind as often as Addison changes her clothes.  Which as you all know is pretty often.

So that is just a peek of some of the things that we are including in the new house!  There are still so many decisions to make, but like I said, I’m feeling good about the choices we’ve made so far.  Maybe I don’t suffer from decision making disorder after all!

39 thoughts on “House decisions made!”

The more torn up the better!

Back to School Checklist