Skip to content
This is some sample text.
Learn More
I really can’t believe our summer is coming to an end!  We’re ready.  The kids are ready (whether they know it or not) and I am VERY ready.  But I have to say that even though there have been moments of insanity (multiple moments each day) overall, we have had a good summer.  A great summer actually.  I spent some time planning out our summer before it started by signing the girls up for several camps and creating a bit of a schedule for us and that was HUGE in our success.  The girls had a chance to develop new skills and new friendships, the kids and I spent lots of time playing together, and Kole enjoyed a three hour nap each day.  Win win for everyone.
Here is a mini wrap up of the fun my girls had at their camps this summer… 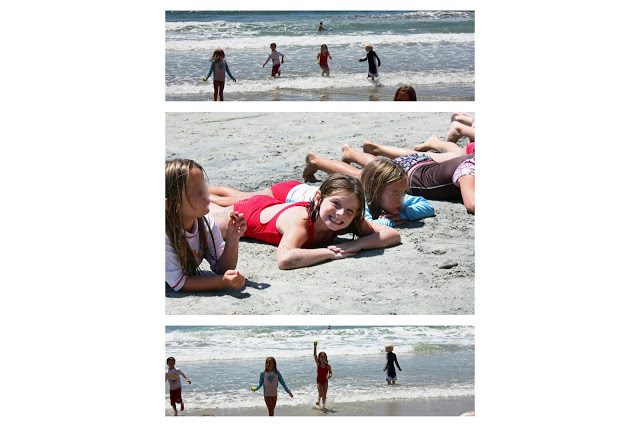 First up was Ellie’s Junior Lifeguard camp.  Two weeks of afternoons spent on the beach learning about ocean safety/life, playing games, doing exercises, snorkeling, and just having fun in the water.  It was her favorite camp by far and a new summer tradition for sure.  Addison can’t wait until she is old enough to join her sister in the waves. 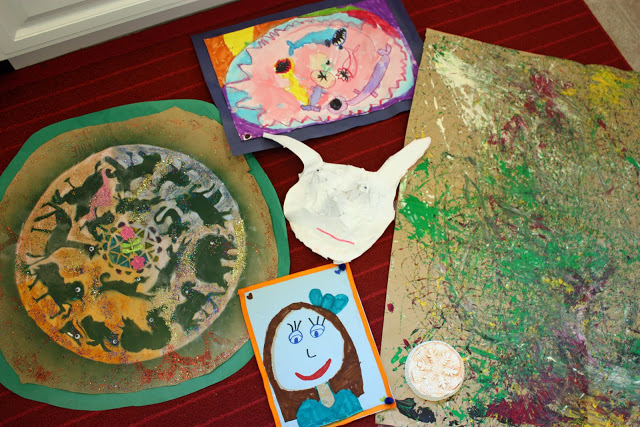 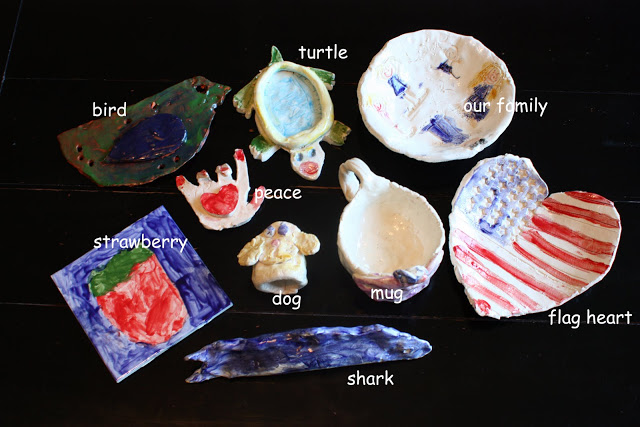 Another favorite of Ellie’s was ‘Clay Creations’ where she created clay masterpieces each day.  She was so excited to bring home everything she made and give it all away to our family.  She had made special pieces for each one of us.  A bird for grandma (who was visiting at the time) a strawberry for Addison, a shark for daddy.  Cause well, what would look cooler in daddy’s office than a slightly jagged blue shark?  Not much I tell ya.

She only made one thing for herself – a dog of course.  Which is good since that’s the closest thing she’s getting to a real dog for a very long time.  And she made a turtle for mommy with green feet.  Because mommy loves turtles and the color green.  That I do.  :) 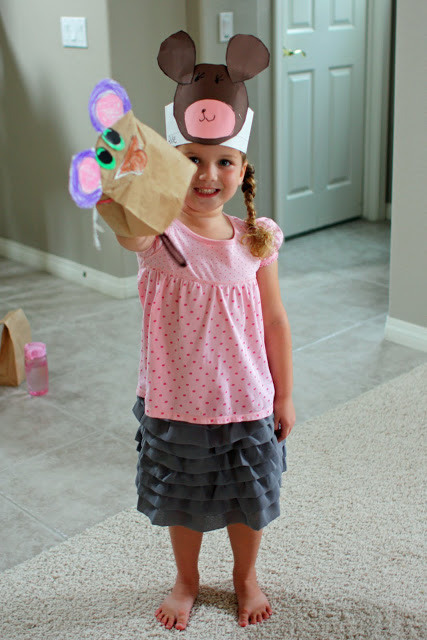 While Ellie was busy sculpting and painting, Addison spent a month in a Kindergarten prep camp.  Aside from having a blast, she got such a great glimpse into life as a Kindergartner by singing, painting, playing, learning to listen and raise her hand.  She almost learned everything too well and started raising her hand at the dinner table each evening when she wanted to say something.  I loved it.  The school teacher in me busted out and I almost instigated a new “raise your hand at the table” policy.  Kole unfortunately ended that idea before it started. 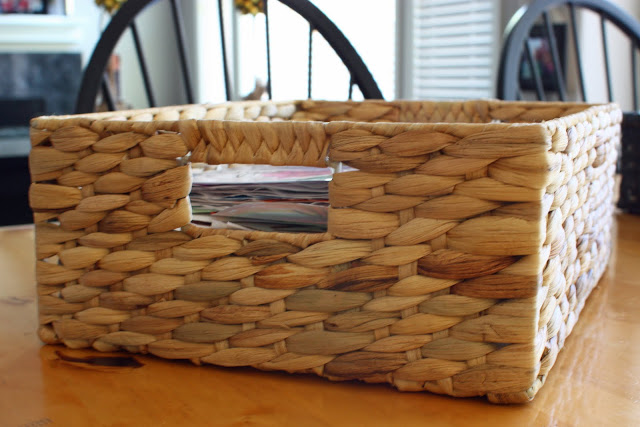 Every afternoon when I went to pick Addison up she had the biggest smile on her face.  Patiently waiting on the rug to show me everything she had done that day.  She brought home so many fun projects that I still haven’t had time to sort through.  For now, I’ve just tossed everything in this basket.  (BTW – I bought several of these beauties at Target and am loving them!) 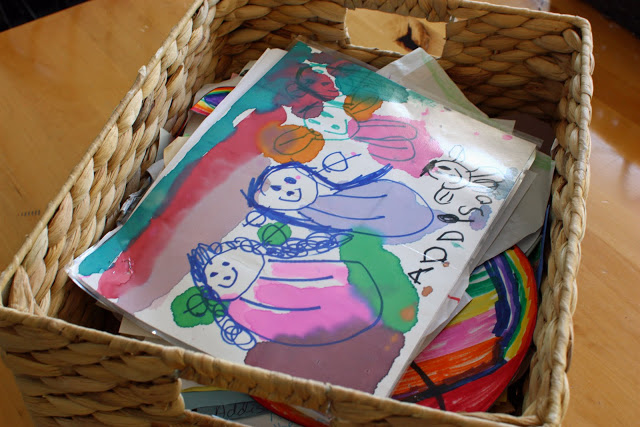 I’m anxious to go through all of her creations to decide what will go in her scrapbook, what will be displayed somewhere in the house and what to toss. 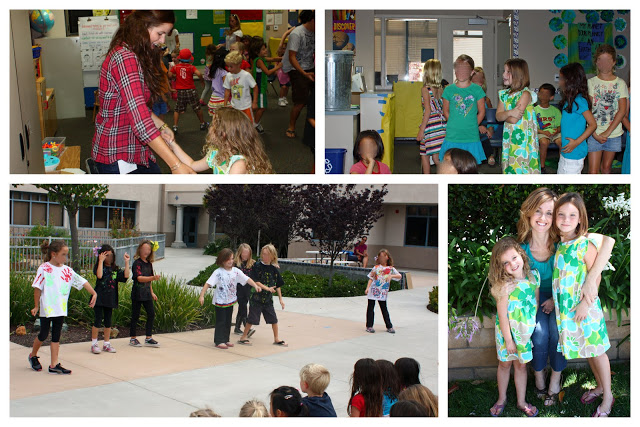 Ellie also took a singing and dancing class and at the end of it they performed their routines for the parents and some other children.  Ellie was so excited that the “bear group” was coming to see her dance since that was Addison’s class.  The singing was delightful and the dancing was hip.  Kenny and I quite enjoyed the show. 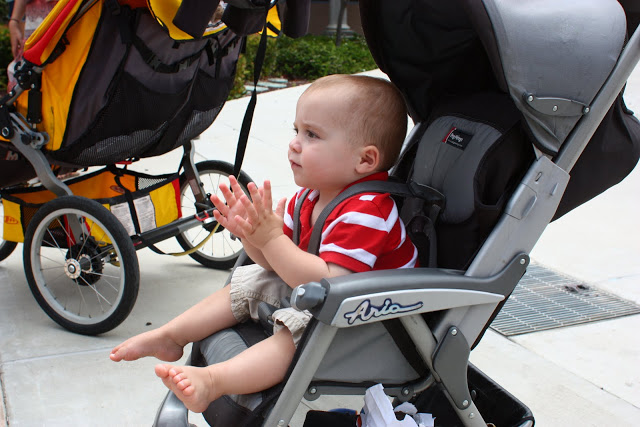 And so did little brother.
The show was captivating enough to keep this little guy strapped in the entire time.
That is saying A LOT. 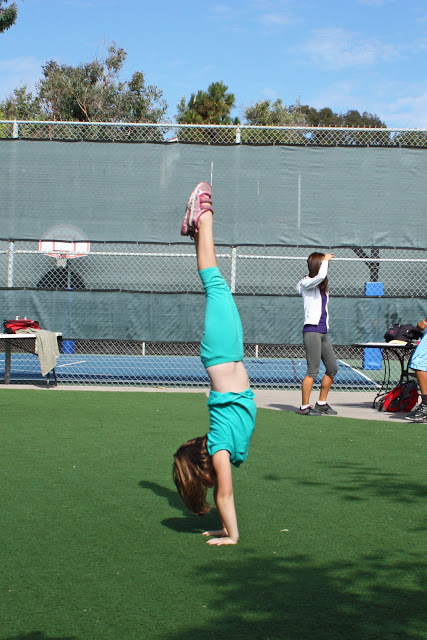 One last camp before we call it a summer!  Last week my girls finished up a gymnastic camp at the center they take gymnastics each week. 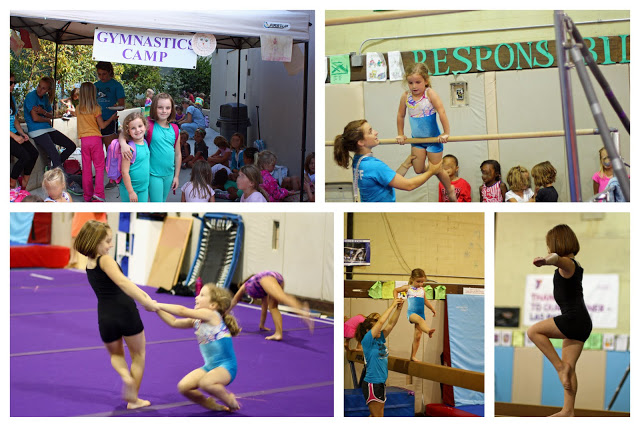 I was amazed at all they learned in one short week.  They have improved so much and really love this sport.  I love vicariously living through them and remembering the day when I too could do a trick or two.  Of course the gymnasts put on a great show at the end of the week. 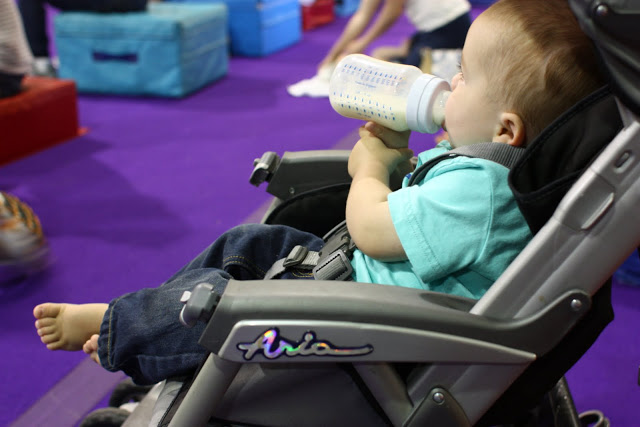 And Kole had a front row seat with the beverage of his choice. 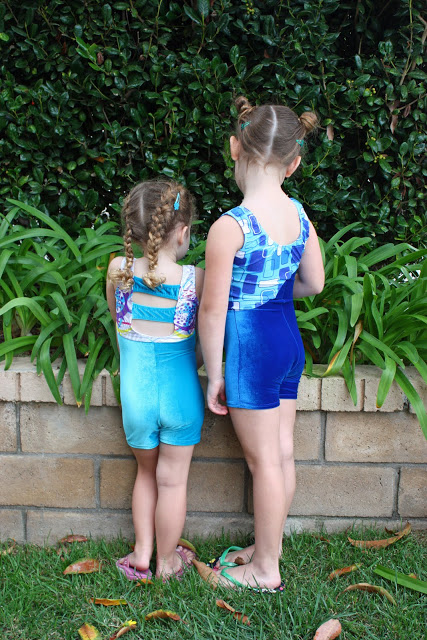 I took this picture about a year ago when Addison started taking gymnastics with Ellie and I can’t believe how far they’ve come since then.  Not just in gymnastics, but in everything they’ve done.  They are growing into such beautiful girls – inside and out – and I felt so proud this summer to claim them as my own.  The two of them really shined during their camps in their own special ways.  They worked hard, played hard, and were kind and respectful to friends and teachers.  Then they came home and helped me by entertaining their little brother.

**Ellie and Addison – I love the two of you so much!  I know that you will soar next year in Kindergarten and Second Grade.  I’m so excited to see what else is in store for the two of you!  Great things for sure.