Friday we went to Ellie’s class to meet her new Kindergarten teacher and see her classroom. She was so excited and nervous. So was mom. :) Her teachers (she has two who are sharing a contract this year) were SO nice and the room was darling. Ellie felt right at home and I have to admit it made me miss teaching! Getting the room ready and starting a new school year is such a fun time. I can’t wait to volunteer and help out in her class. 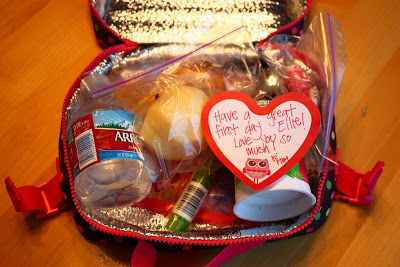 Yesterday was her first day of Kindergarten! Our house was a buzz of excitement as we all got ready to take Ellie to school. The whole family went!

Not quite sure what was up with their arms in these pictures. They were excited and acting silly – as usual.

Walking to the school…parking was crazy the first day!

This was the last look Ellie gave me before she walked into her classroom and just after I took the picture she started to cry. :( I got her settled in her desk, told her I’d pick her up after lunch, gave her a kiss and left. At the end of the day her teacher told me she only cried for a minute. Whew! Much harder on me than on her I’m sure. When I picked her up she was happy and excited to tell me about her day. Here are a few things she told me:
-they have star charts (but different than our star charts) and get a prize when they get all of their stars
-one girl in the class wasn’t minding and didn’t put away the toys when she was supposed to
-her teachers did a really silly dance that made her laugh
-they played a duck and chick game and she got a turn being the chick
-at snack time she got confused and ate some of her lunch at snack and then ate her snack at lunch
-there were only two recesses and they listened to the teacher six times (not fair)
-they had a meeting (I’m assuming this was an assembly) and a man talked and said NO GUM in school
-she likes her teachers and thinks Kindergarten will be fun, just not as fun as Kindergarten camp and pre-school
Give it time baby! We are all so proud of you Ellie. You were the cutest little Kindergartner ever.
{SECOND DAY}

Today was day two. She wore her monkey shirt and was one happy little gal. Kenny took her on his way to work and said she didn’t cry a bit. :)