Skip to content
This is some sample text.
Learn More
{I’m warning you right now that this post is long.  I took way too many pictures and my indecisive nature causes me to just post them all instead of actually having to agonize over which ones I should cut.  You may want to grab some leftovers.  Or start a load of laundry.}
Well!  Now that my warning is out of the way and you fully know what you’re getting into, we’re back.  Spent all of last week in Utah with family and had a great vacation.  The kind of vacation that is just such a bummer when it’s over.  My kids had a fabulous trip.  My niece was at my mom’s all week too and the three girls had a par – tay.  To say the least. 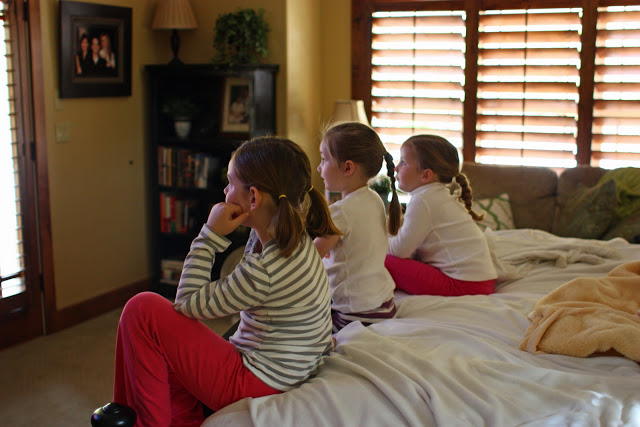 They watched movies together on grandma’s bed. 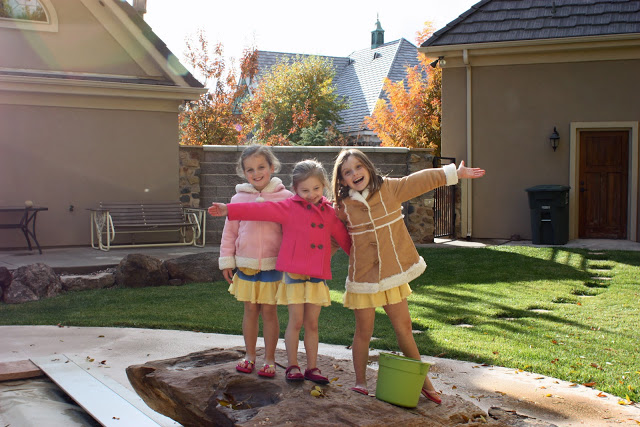 Turned the back yard into their personal playground. 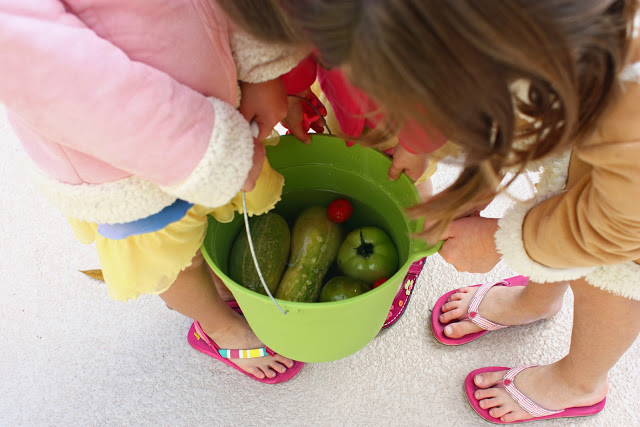 Created all sorts of interesting “soups” and “potions” out of vegetables from grandpa’s garden. 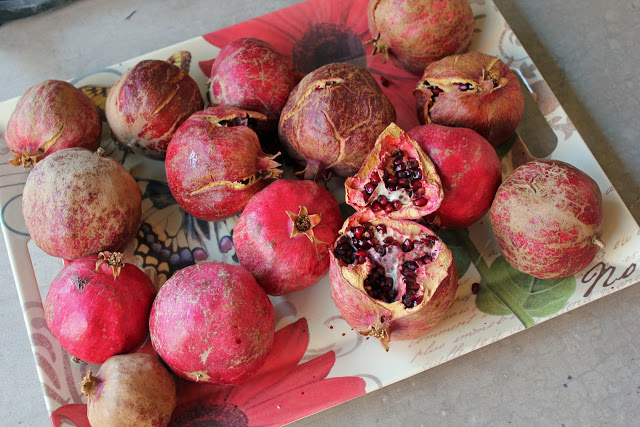 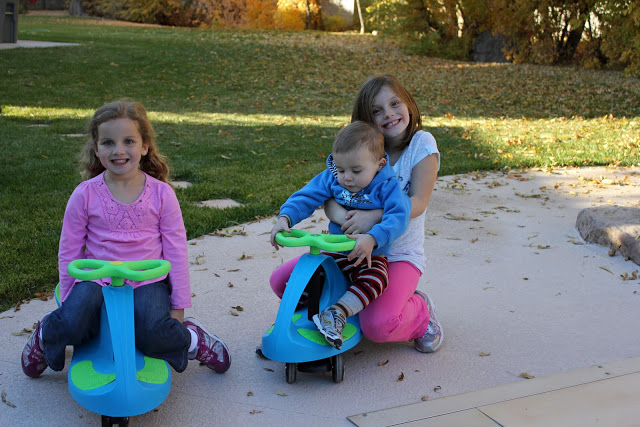 They drove around everywhere on their fancy little scooters. 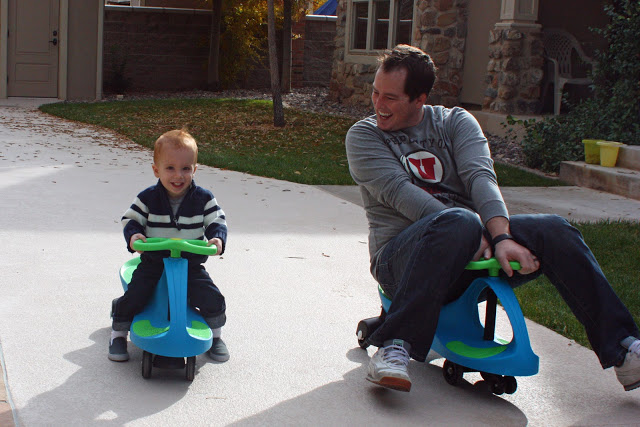 And were joined by their Uncle Austin and cousin Drew – Kole’s mischievous partner in crime. 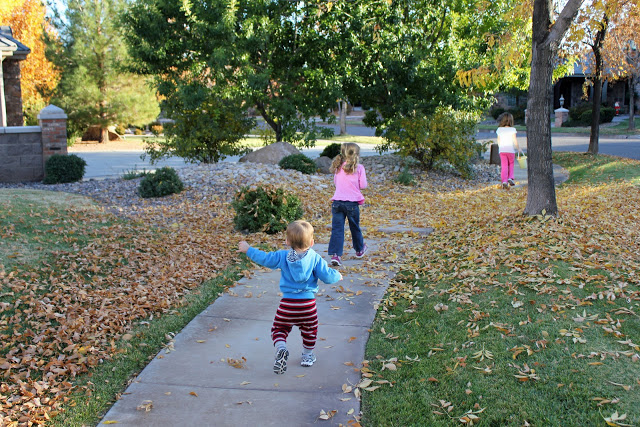 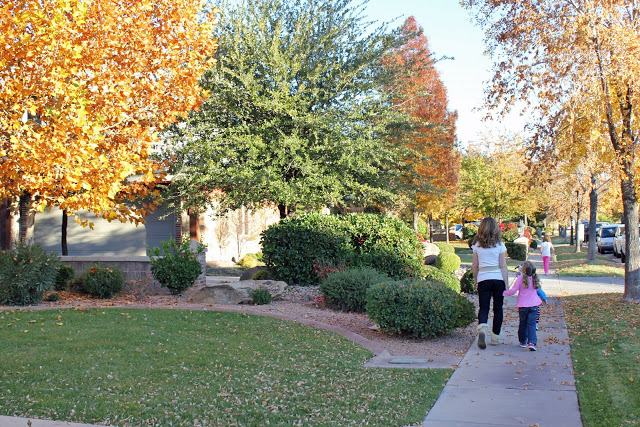 They went on nature walks with mom and grandma and enjoyed all of the beautiful fall leaves. 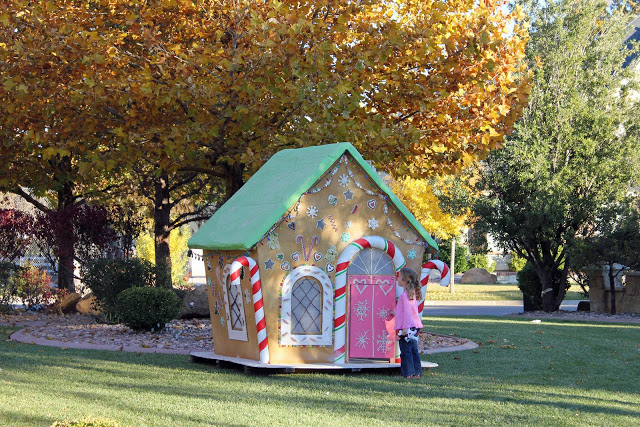 And the neighbors’ Christmas decorations. 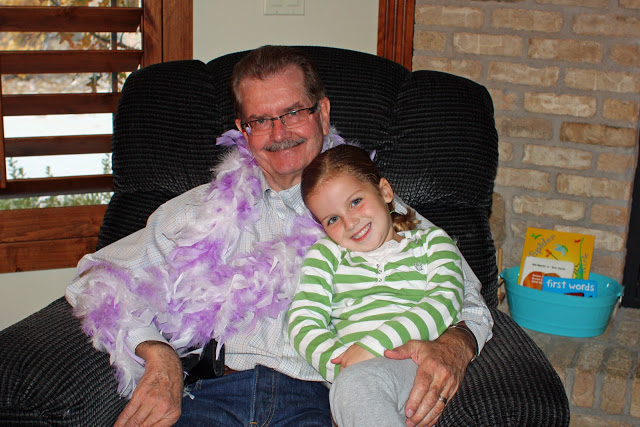 They dressed grandpa up fancy. 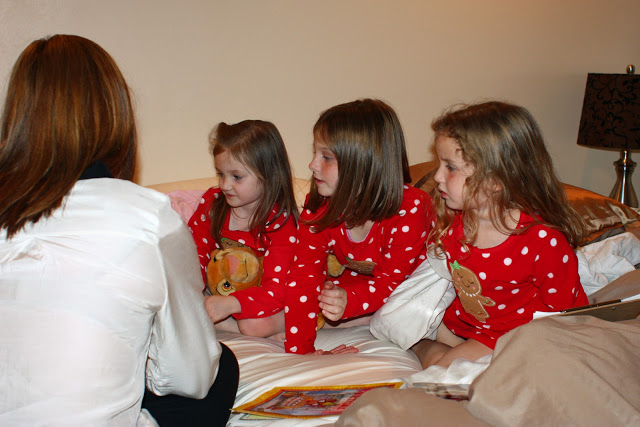 And enjoyed stories by Aunt Carly in matching Christmas p.j.’s. 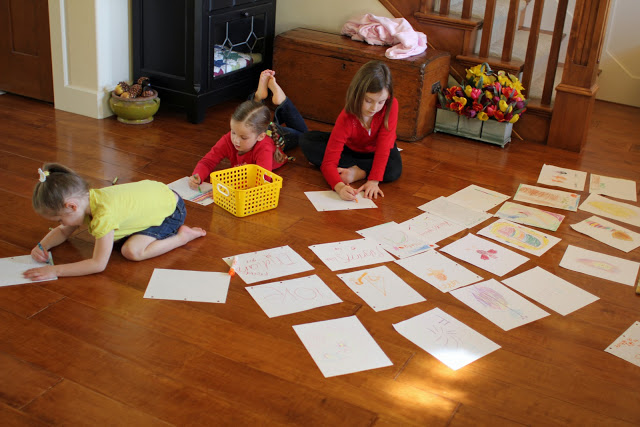 Realizing they had all of the adults in the palm of their hands, they got creative and came up with a little money making scheme.  Ellie led the charge on this one of course. 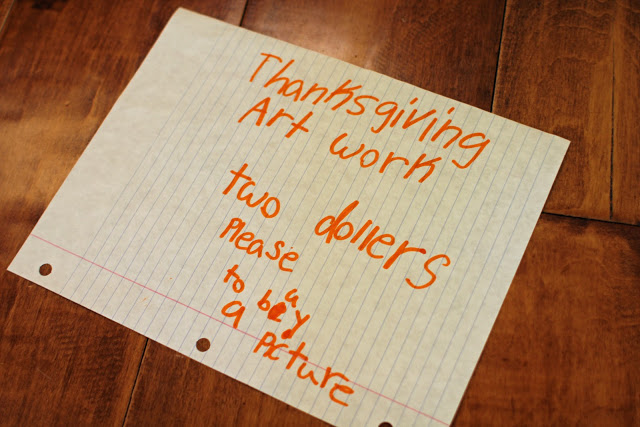 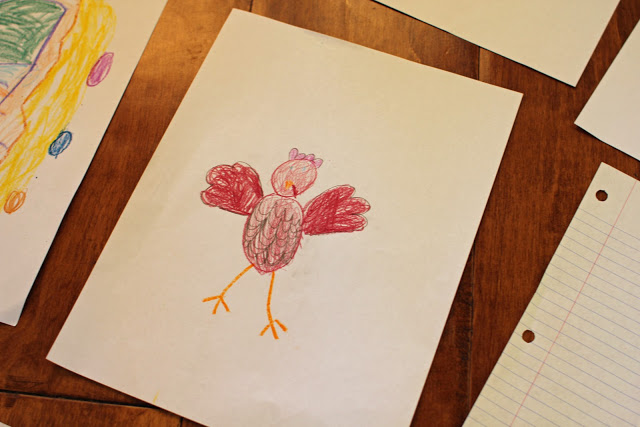 Who could resist buying this stunning turkey?  And for the bargain price of a mere $2.00!?  Those clever little illustrators walked away with pockets full of cash and smiles on their faces.  When we went shopping later, Addison was torn on whether or not she should part with her earnings to buy a stuffed animal.  Ellie said, “Don’t worry Ad!  We’ll just draw more pictures!” 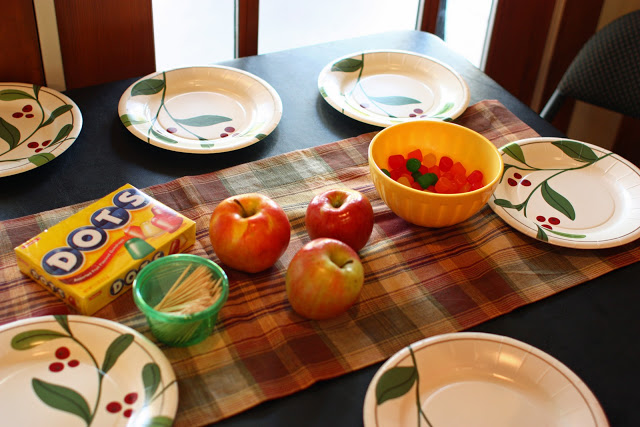 The girls had their own Thanksgiving table for the big day.  I gave them some apples, toothpicks, and dots and told them to make their own turkeys. 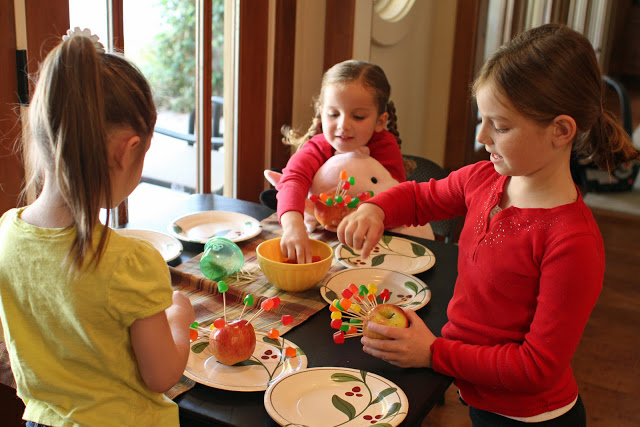 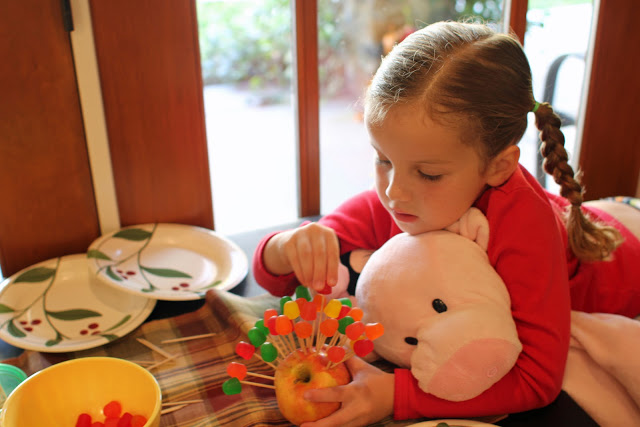 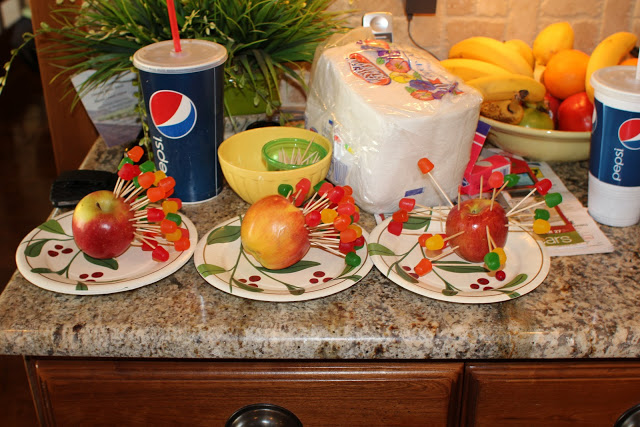 And here are the finished turkeys.  The girls kept eating the dots and dinner was done before they had a chance to make the heads.  Oh well!  {I’d like to point out my mom’s diet cokes in the background – she’s seriously addicted.  Wouldn’t be a trip to grandma’s without a diet coke run every few hours.  I just felt that had to be recorded for our posterity.}
Love you mom.  :) 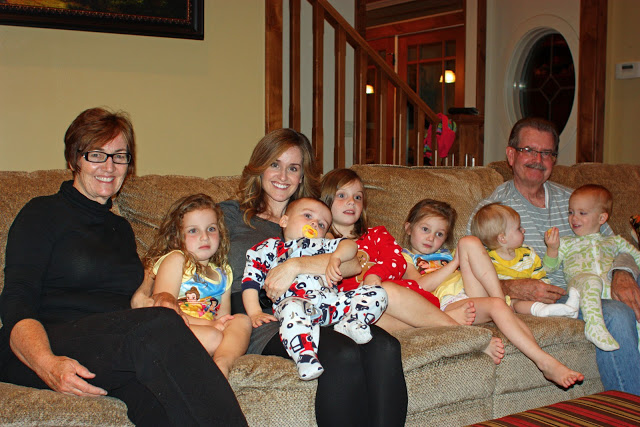 The girls weren’t the only ones who had fun.  I loved spending time with my family.  Parents, siblings, nieces and nephews – everyone was together and it was the best.  Totally crazy and loud and did I mention crazy!?  But the best.  We love to all be together. 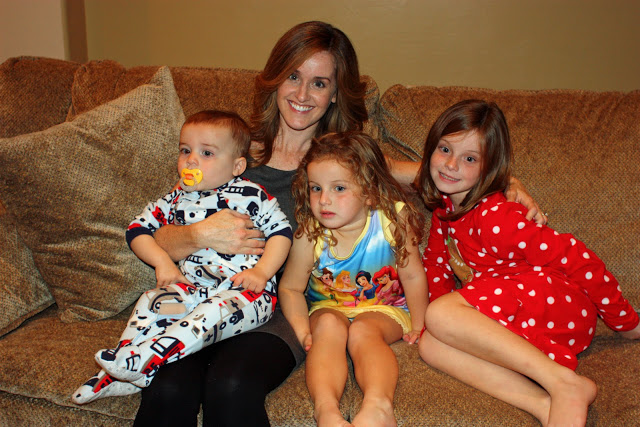 This picture made me laugh.  My kids couldn’t pull their eyes away from the TV long enough to smile for a picture.  Looks like Ellie at least attempted a smile even though her eyes are still glued to the tube.  I believe we were watching “Shrek the Halls.”  That’s right.  I only allow my children to view the finest in quality educational shows.  Last year at Thanksgiving I gave myself the parent of the year award when Ellie told her first grade class that the one thing she was grateful for was McDonalds Happy Meals.  Looks like that gold pleated trophy is mine again! 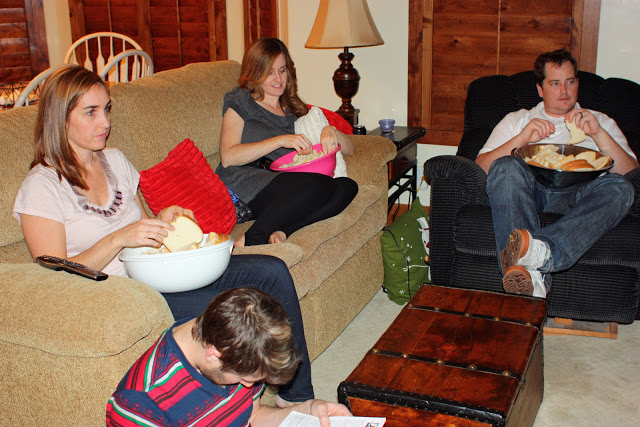 Here we are the night before Turkey day getting the stuffing ready and watching Gone With The Wind.  Because “after all, tomorrow — is another day!”   Best movie ever.  They don’t make em’ like that anymore. 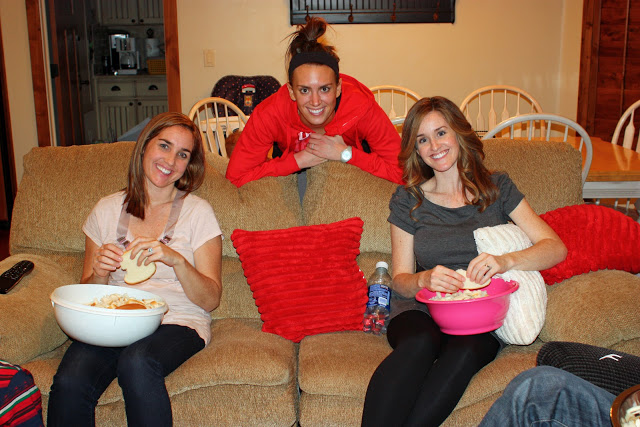 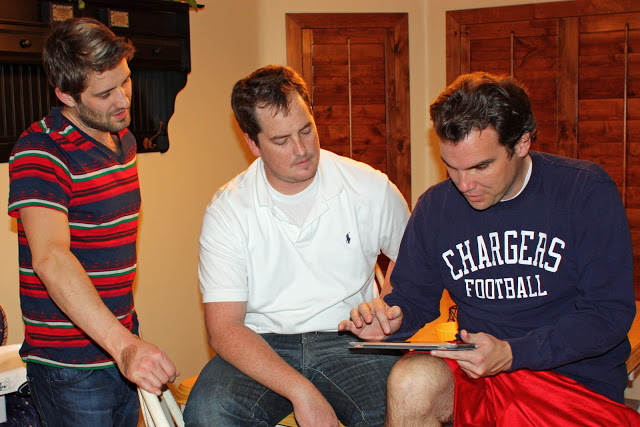 And the guys.  Who thought something on Kenny’s ipad was a bit more intriguing than Scarlett O’Hara and breaking bread. 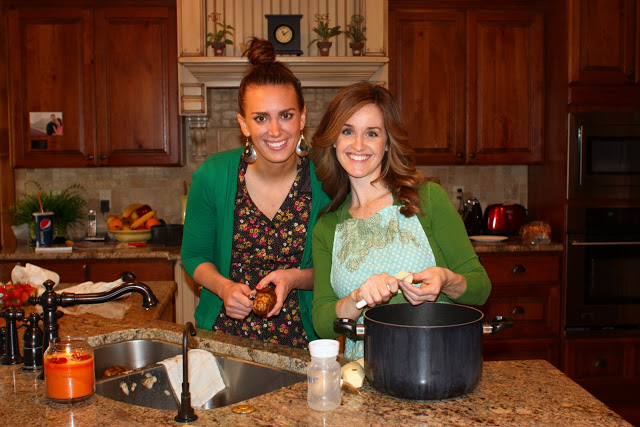 And if you aren’t already super impressed with my mad bread breaking skills, I’ll have you all know that I also cut the potatoes.  That’s right.  And I wore my new anthro apron to boot.  Broke it right in cutting potatoes after Dayna peeled them. 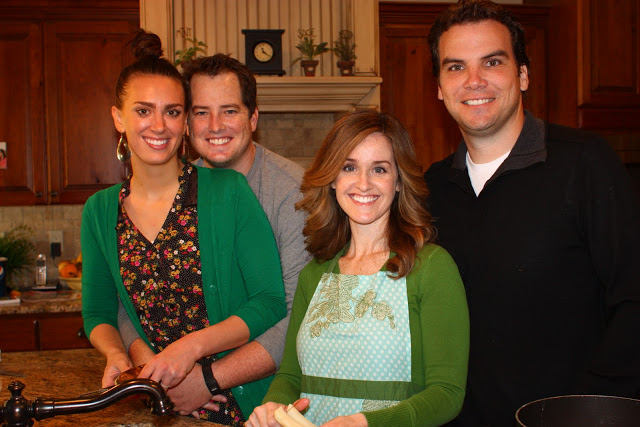 Soon after this picture I took my apron off and decided I’d be in charge of the kids because, well, why push it.  I didn’t want to actually spill on my anthro apron.  It is a crucial part of my kitchen decor you know.  ;) 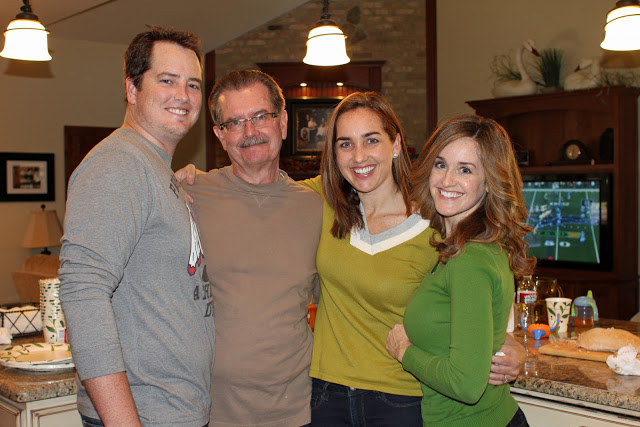 Brother, dad, and sister.  Love these three.  And they love me.  Even if my idea of helping with Thanksgiving dinner is to prance around in a new apron rather than to actually help prepare the meal.
I’m lucky to have them. 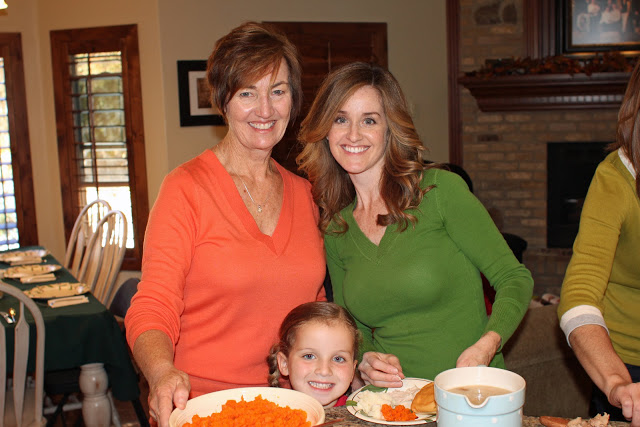 Also lucky to have these two. 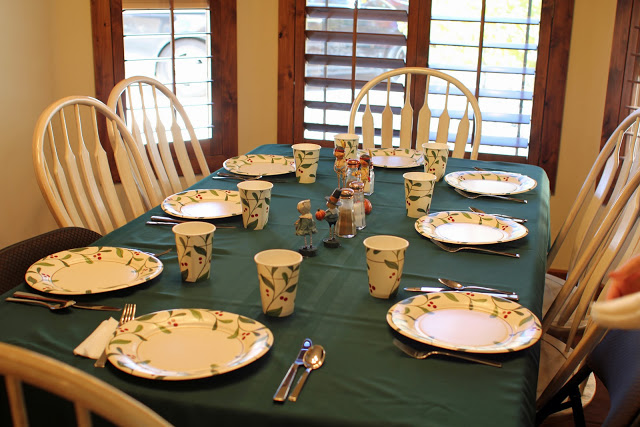 My mom and I made the executive decision that since we had six kids ages seven and under and since three of those six kids were one year olds that it would be ok to opt for paper plates instead of the fine china.  Nobody complained a bit.  Especially when it was time to do the dishes. 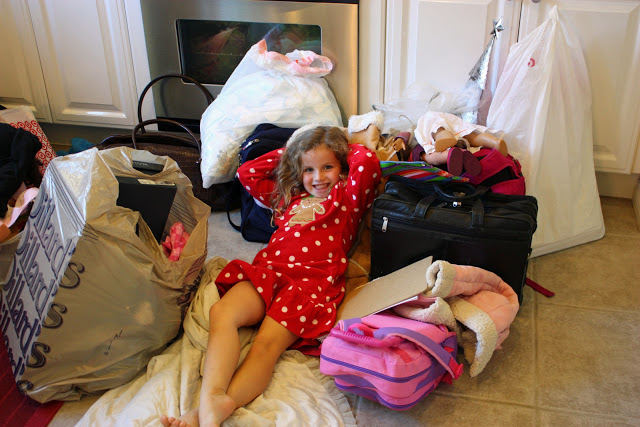 Yes.  It was a good vacation.  One that will be hard to recover from.
Although some of us seem to be recovering better than others.
:)
xoxo, Erin
Share
Leave A Comment
Share The Post
Join the Conversation
Cancel reply

24 thoughts on “Our Thanksgiving”

Let Gratitude Be Your Attitude