So I’ve been out of town the past five days!  On a little trip.  Wondering where?  I’ll give you a clue:
I went to sleep every night to the sound of ambulances and woke up each morning to the sound of construction.  (Sounds heavenly, right?)


NEW YORK baby!  Our get away to the big apple!  When Kenny told me over the summer that he had partner meetings in October in NYC and asked if I’d want to come, I got excited.  Then when he mentioned that we would be staying on Madison Avenue in a fancy hotel because of those meetings and that I would have to keep myself entertained for one full day, I got really excited.  Keep myself entertained on 5th Avenue in Manhattan?  REALLY!!??  A day all alone to do nothing but shop!  By myself!  On 5th Avenue!  Yeah babe.  I think I can handle that.  And handle that I did!  I spent one full day in the heart of downtown Manhattan.  Shopping and taking in the sights: 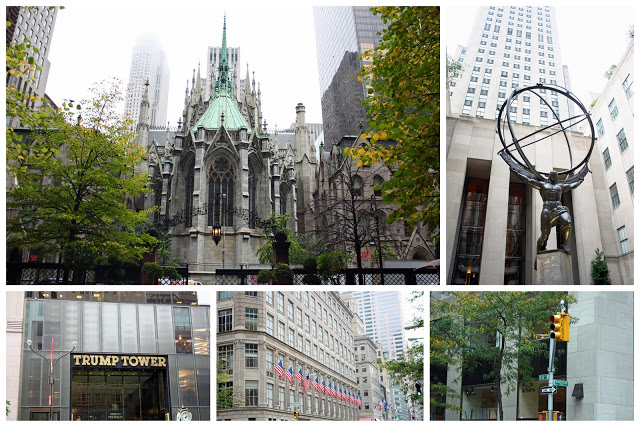 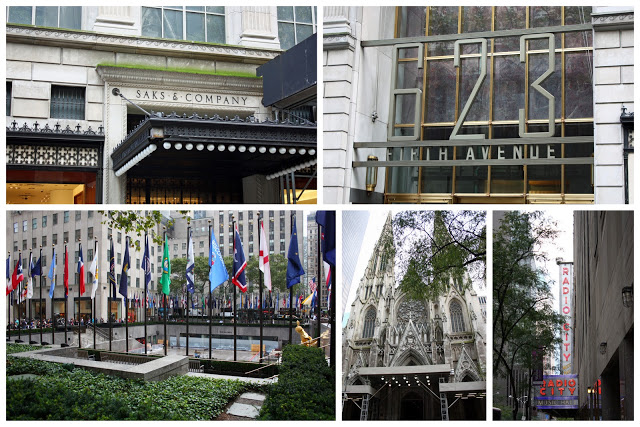 But I wasn’t completely alone!  A couple of days before we left on this trip my sister called and told me that she was heading to New York around the same time we were.  Her boss was taking her and some co-workers on a quick trip (totally last minute) and they were staying in Manhattan… on Madison Avenue!  We couldn’t believe it!  Not only would we be in New York at the same time, but we were staying only blocks away from each other!  The night before we flew out, we realized we were flying on the same plane!  We could NOT believe our luck.  We knew we had to meet up.  My sister and I don’t live close to each other and it is so rare that we get to spend time together.  Especially time WITHOUT our kids.  We were totally giddy at the thought of shopping together in New York! 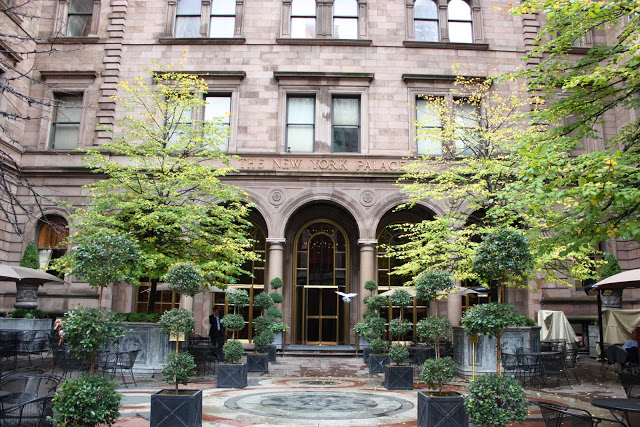 The hotel Kenny and I stayed at was called The Palace (his job comes with some serious perks) and Carly and I couldn’t resist acting like we totally belonged in this setting.
Our text messages to each other just before we met up:
Car:  I’m coming to you.  Let’s meet at the Palace dahling.
Me:  K – call when you get here.  Or come up to the 16th floor room 1608… dahling.  That’s where I’ll be polishing my silver.
Car:  Perfect, stay put.  Have Buffy meet me at the door to take my mink.
She met me at my room and as soon as I put away my silver and Buffy had taken care of Car’s mink, we hit 5th Avenue! 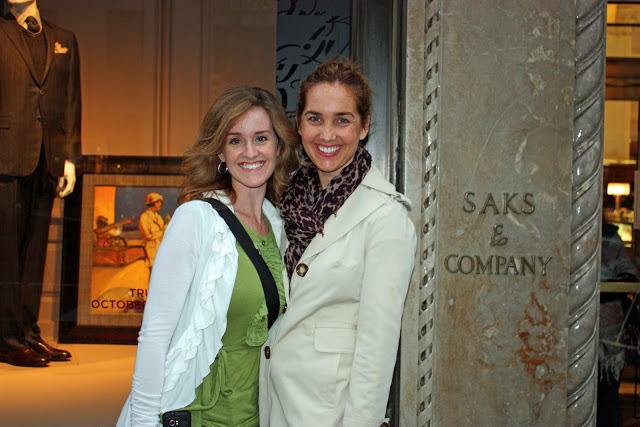 We were deliriously happy to be together – acting like the biggest dorks.  Shopping in one amazing store after another.  It was the best day.  Later that evening when we were both back at our own rooms we texted all night long about our luxurious new life style and I got laughing so hard I almost cried.  No one can make me laugh like my sister can.  Whenever I’m with her my cheeks hurt from smiling and laughing so much.  It was such a great way to kick off my trip and it couldn’t have worked out more perfectly if we had planned it!

After day one of the trip, Kenny had finished his meetings and I was so excited to spend some time with him.  The first thing we did was head to the new 9/11 memorial.  We really wanted to see it while we were there so Kenny got us tickets the week before our trip. 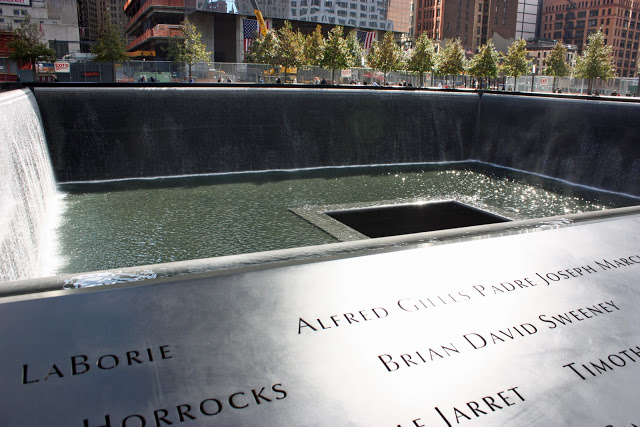 The memorial is two huge pools where the twin towers used to be.  Water is pouring in on all sides and the names of the people who died are engraved all around the pools. 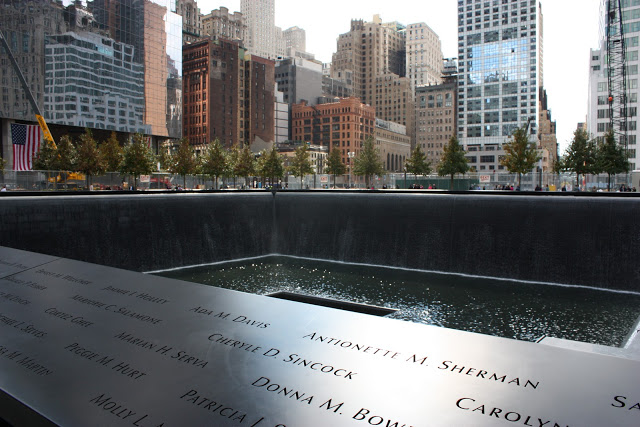 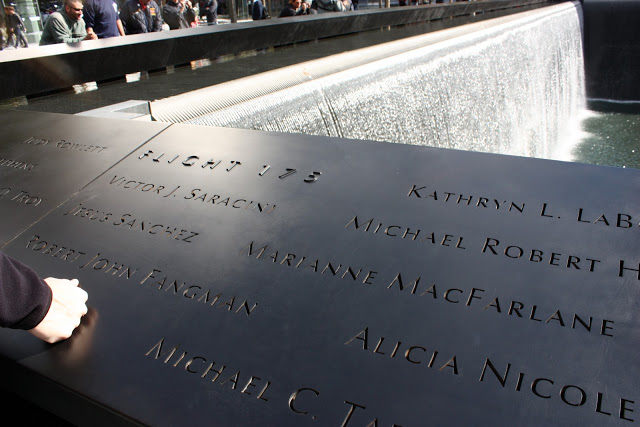 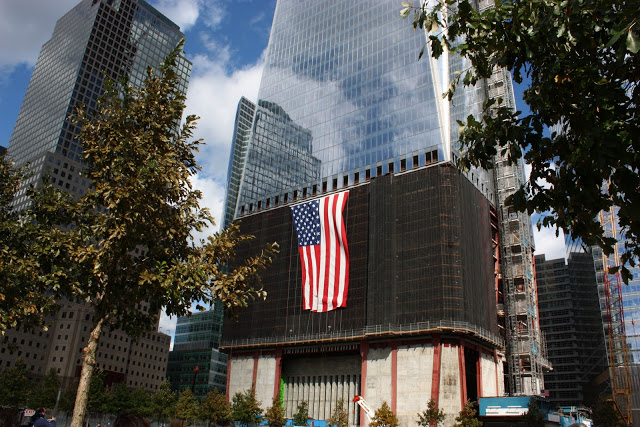 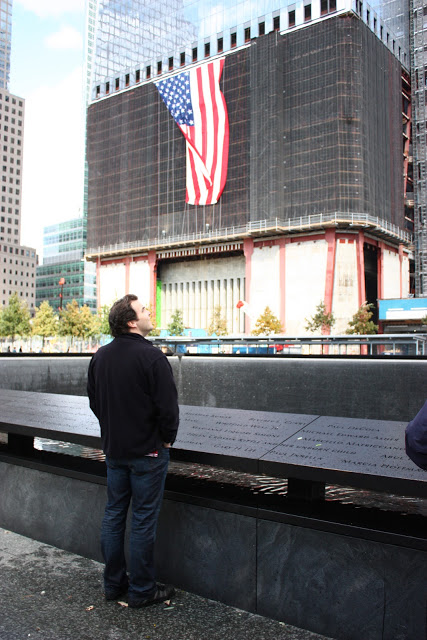 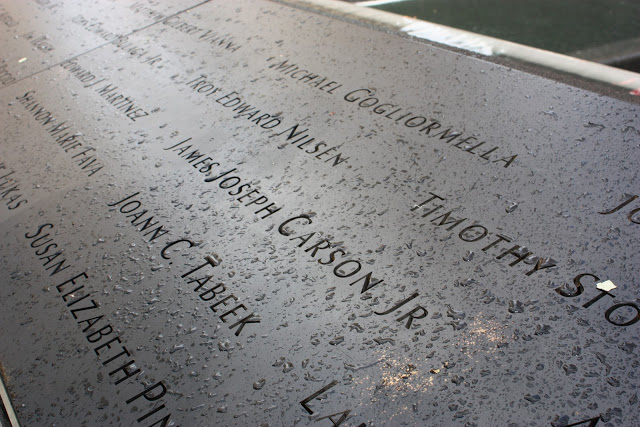 It was really sad.  I don’t know how else to explain the feelings I had while we were there.  Just an overwhelming sense of sadness.  It was hard to be in the place where everything happened.  To see exactly where the towers stood and to see those never ending fountains in their place.   But I felt fortunate to see the memorial and to honor the people who lost their lives that horrific day.
After we left the memorial, we did a little sightseeing and were greeted around every corner by protesters. 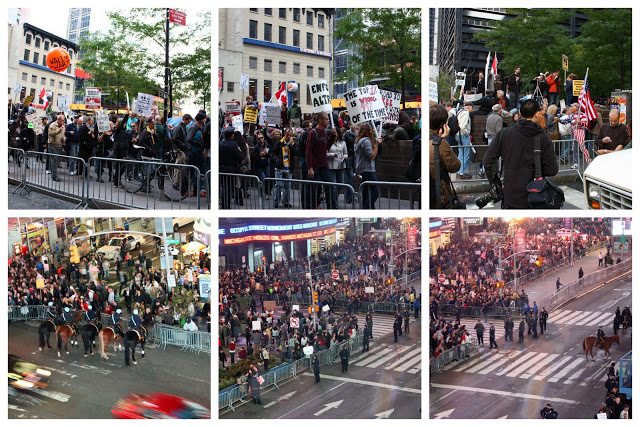 New York is crazy right now!  Protesters everywhere!  We tried to steer clear of the madness, but couldn’t resist snapping a few pictures. 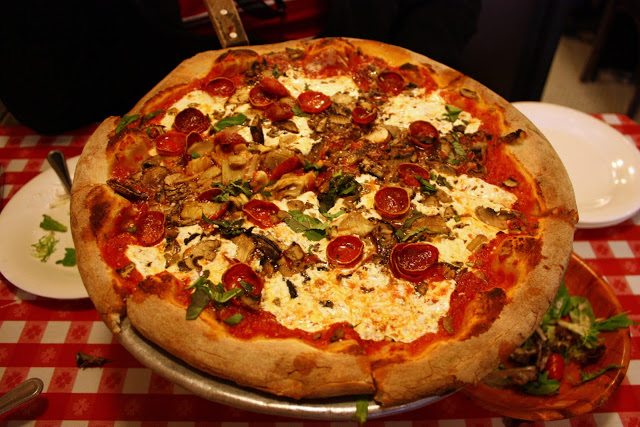 We ate lunch one afternoon at Lombardi’s Pizza.  Kenny has wanted to take me to this place for a while now because he has eaten there before.  Lombardi’s was America’s first Pizzeria and is known to have the best pizza around.  It didn’t disappoint!

Taking in a few more sights: 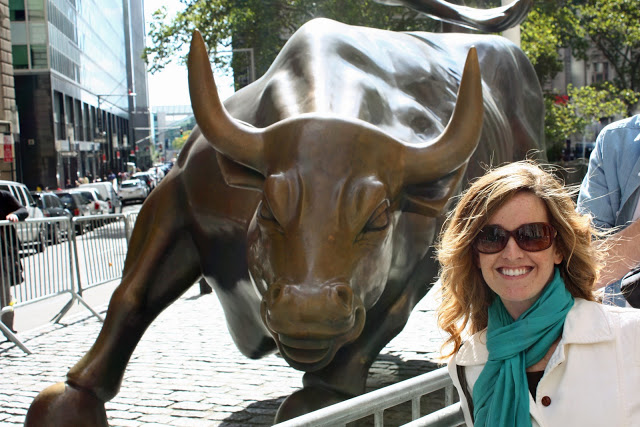 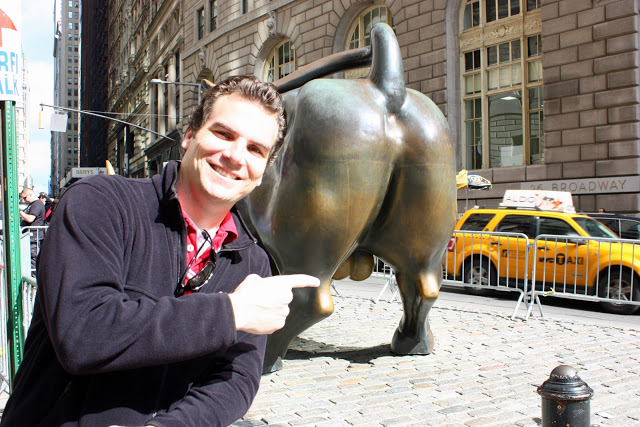 And my husband who is 36 going on 12.  Sorry.  This is a G rated blog so I hesitated posting this picture, but couldn’t resist.  Kenny and I had fun coming up with some great catch phrases to accompany this picture. 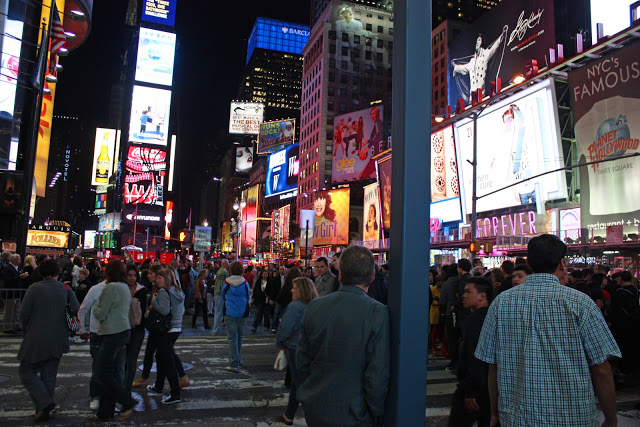 Time Square at night!  What a circus this place is!  Kenny called it “an assault to one’s senses” and I couldn’t agree more.  All of the smells and lights and people.  It’s hard to focus on simple tasks like walking because of everything going on around you. 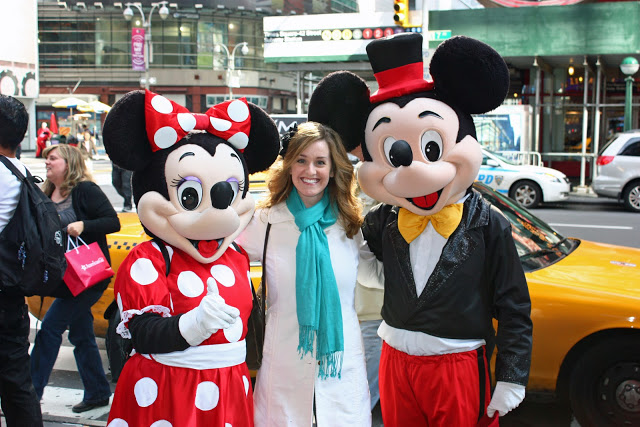 When we randomly passed Minnie and Mickey I had to get a pic.  I haven’t been to Disneyland since I had Kole and have had serious withdrawals.  Although this Micky and Minnie didn’t speak English and were a bit odd. 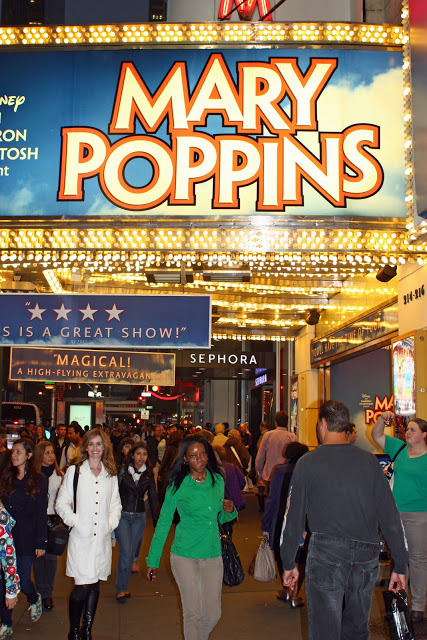 And the best part of the trip!  The Broadway plays.  Kenny and I LOVE the theatre.  LOVE it.  Remember a few months ago when I asked all of you if we should see Mary Poppins or Lion King?  So many of you raved about both that we decided the decision was made for us.  We’d have to take your great advice and see both plays! 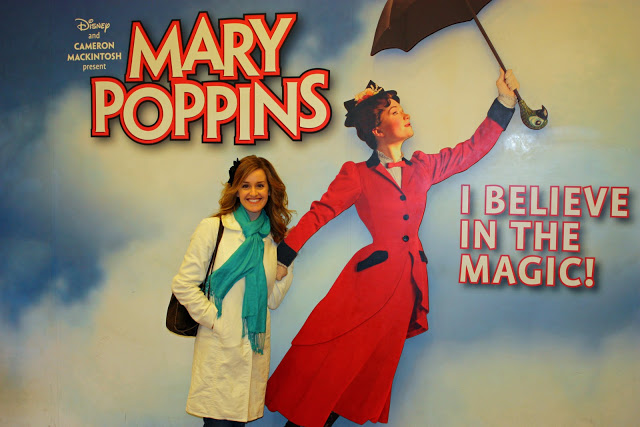 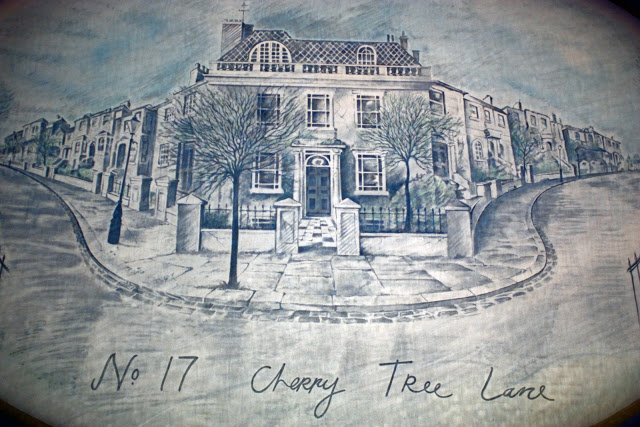 Marry Poppins was amazing!  I am a huge fan of the Disney (one of my favorite shows growing up) and loved seeing it on Broadway.  It made me so homesick for my girls.  They would have loved it too.  Next time it comes to San Diego we are taking them for sure.  But there is nothing like seeing a play on Broadway.  The set changes, music, costumes, acting – all phenomenal.  At the end Mary Poppins flew right over our heads.  Unreal! 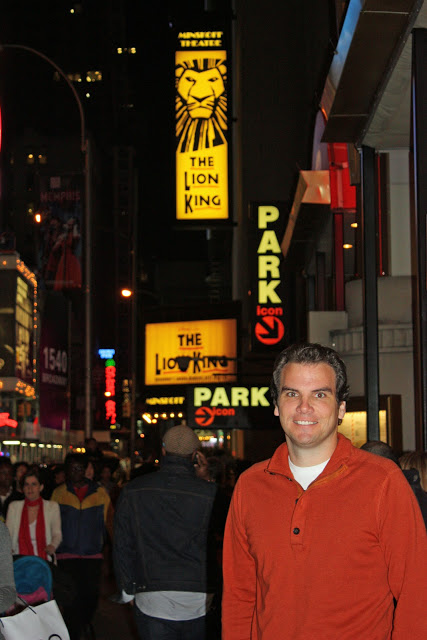 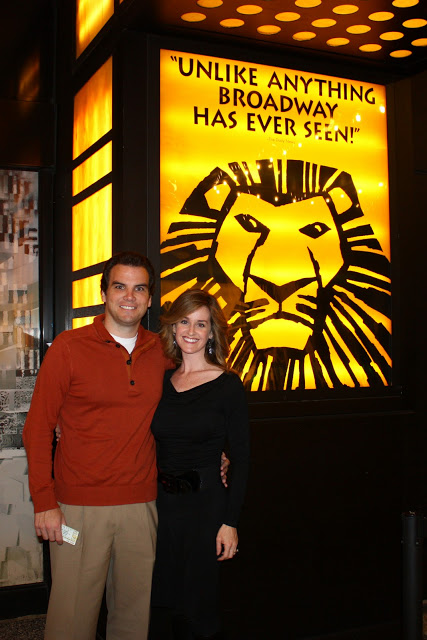 Lion King was also incredible.  In the opening “Circle of Life” scene when all of the animals started pouring on the stage I started to cry!  I couldn’t help it!  The music and costumes were that amazing.

This little getaway was just what I needed.  Kenny and I were able to spend so much time together.  Alone!  We were able to have complete, uninterrupted conversations.  Uninterrupted!  Complete sentences!   And sleep in!  Even though the construction woke us, we went back to sleep!  Even the plane ride was heavenly.  I read a magazine, organized pics on my laptop, and gazed out the window fully enjoying the fact that I had no one to take care of but myself.  And my kids had a blast with all of their grandparents.  And by the end of the trip I was really missing them.  And now if feels really good to be home again.  With my kids.  Taking care of everyone but myself.