Well! December is certainly proving to be as busy as usual. I still feel like I’m recovering from last weekend. We woke up early Saturday and after breakfast started with the tree. I didn’t get too far before my cereal had worn off and I was dying of starvation. 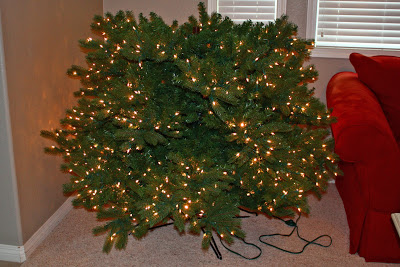 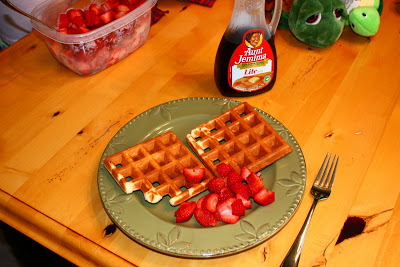 so Kenny made me and the baby waffles. This little guy loves waffles. And strawberries. With LOTS of syrup. Then I was ready to go again…until an hour later…when the waffles had worn off and I was famished. This whole eating thing, fun as it is, is really starting to get in the way of my productivity.

When the tree was all up and decorated Ellie said, “Oh Add, our tree is so beautiful! We just have to get our cameras and take a picture!” And that’s just what they did. :)
After the tree was trimmed we hung all the outside lights and they look amazing! I’m also happy to add that this is the first year Kenny and I managed to get through it without one fight. It’s usually not a happy time since hanging lights is one of Kenny’s least favorite things to do and my light motto is more more more! If three candy canes look good than twelve is better! Why only put up one reindeer when you can have the whole fleet and sleigh! How silly to cover only one bush and tree in lights when you can cover them all! Yes, the house is looking a little Griswaldish, but I love it. And Kenny loves that it’s done for one more year. See – it’s a win win.
Inside of house was finished up, errands were run, dentists appointments went smoothly, 200 homemade Christmas cards were finished and stamped and mailed, church was attended (aside from the half hour in-between meetings that I had to run home and eat a peanut butter sandwich), Christmas village was assembled, kids were bathed, fed, entertained, and house was cleaned. Now if we could have just had a weekend to recover from our weekend, it would have been perfect!
xoxo, Erin
Share
Leave A Comment
Share The Post
Join the Conversation
Cancel reply