Skip to content
This is some sample text.
Learn More
So if you know me you know that I have a thing with pajamas. Maybe some would call it an obsession. And because of this obsession I went a little crazy with the girls Christmas p.j.’s buying them several pairs this year because there were just too many cute pairs to choose from! Then my mom came to visit a few weeks ago and what did she bring for the girls? Christmas pajamas. (the apple doesn’t fall too far…) I usually give the girls their Christmas p.j.’s after Thanksgiving so they can wear them throughout December, but I figured we’d start a little early this year and spread them out. :) So I gave them their first pair today and just like last year, got all ready for our annual Christmas p.j. photo shoot on my red couches.

Girls were cooperating until… 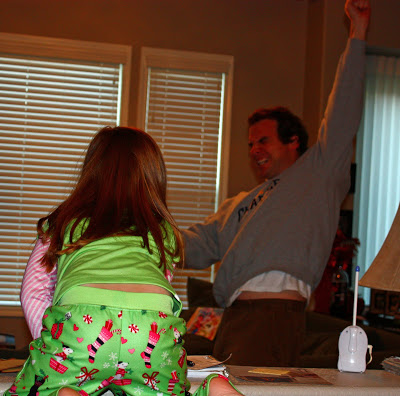 And this came to mind {“In the Christmas Eve game there arose such a clatter, Erin ran to the living room to see what was the matter. When what to her wondering eyes should appear, but Kenny dancing around in his blue Charger gear!”} Sound familiar? :) 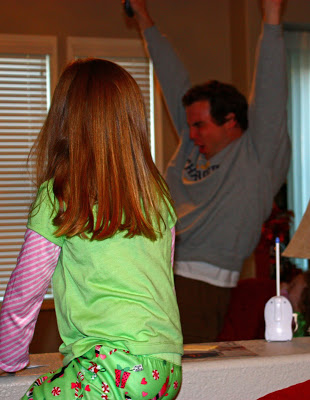 We knew this could only mean one thing. The Chargers won! Scoring the winning touchdown with 21 seconds left in the game! (YES! They FINALLY got my letter!!!)

Someone in our house was pretty excited.

And that someone got two other someones pretty excited.

and someone else (who after all of this excitement tried to resume the photo shoot) quickly realized that picture taking was done for the day. But that someone isn’t bitter. She is thinking that if the Chargers keep this up, our little family is going to have a VERY Merry Christmas. ;)
p.s. I was featured today as a “Monday Maven” on the fun blog ‘I Never Grew Up’! You can check out my interview here.
Thanks Vanessa!
xoxo, Erin
Share
Leave A Comment
Share The Post
Join the Conversation
Cancel reply

You’re gonna have your hands full