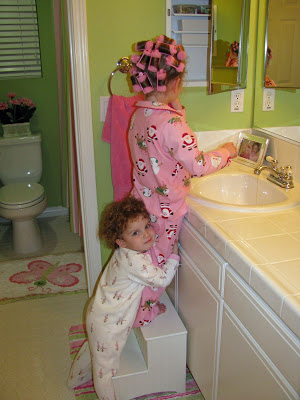 This is a random picture I took sometime in December. I happened to have my camera upstairs and caught Addison hugging Ellie goodnight while Ellie was still brushing her teeth. Addie is pretty adamant about hugging and kissing everyone several times before bedtime. She, like her sister, is a master staller.

***Update on the potty training. It’s done. She’s potty trained and was after day one. I don’t know WHAT I did to deserve this but it was so easy with Addison. We haven’t even had an accident! It was like once she got over the fear of going the first time it was no big deal. She does everything herself (on the big potty) like she’s been doing if for years. I’ve been in a state of shock! I don’t know if it’s because I waited longer with her and she was just ready, because she sees Ellie doing it all the time, because I knew better what I was doing, because she doesn’t like messes and keeps saying “I can’t go potty on Cinderella!” (Cinderella panties), or if it’s because she has more of an independent personality. My real theory is that someone up above felt like Addison has given me enough stress in her little lifetime and I deserved a break. :) Whatever the reason, I don’t care. She’s potty trained and I didn’t even have to break out the Resolve. Life is good.

25 Random things about me