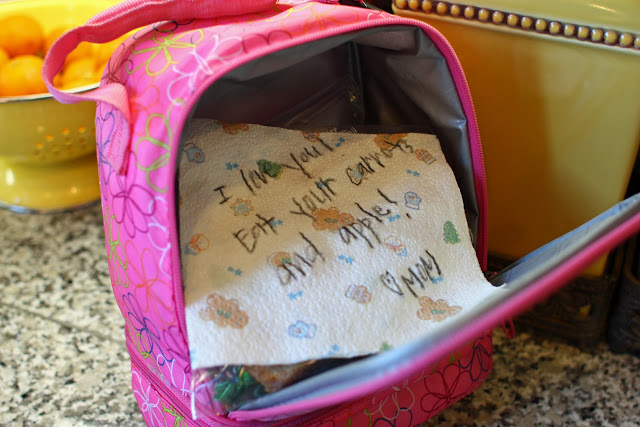 I was sorting through my pics tonight and this one made me smile.  I’m so happy it’s summer because once again I can control what my kids are (and aren’t) eating.  Too many times their lunch boxes would come home with all of the healthy stuff still neatly packaged and the fishy crackers?  Not a trace.  Even my napkin note reminders weren’t helping much.  Well those days are long gone! 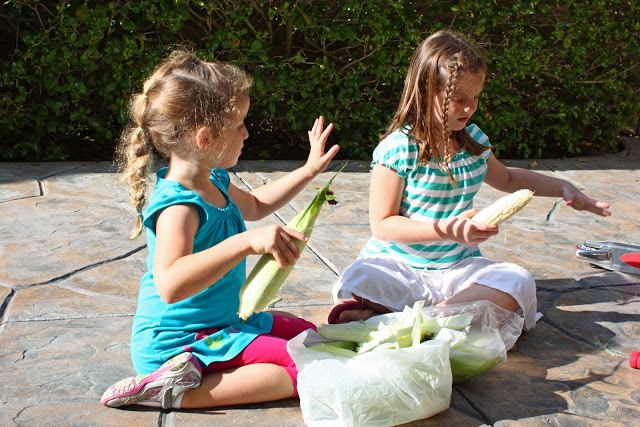 Not only are the kids eating better under my 24/7 watch, but in true I’d rather be doing anything than cooking Erin fashion, I’ve also turned a lot of the food prep over to them.  It’s clear from the picture above that they enjoy it as much as I do. 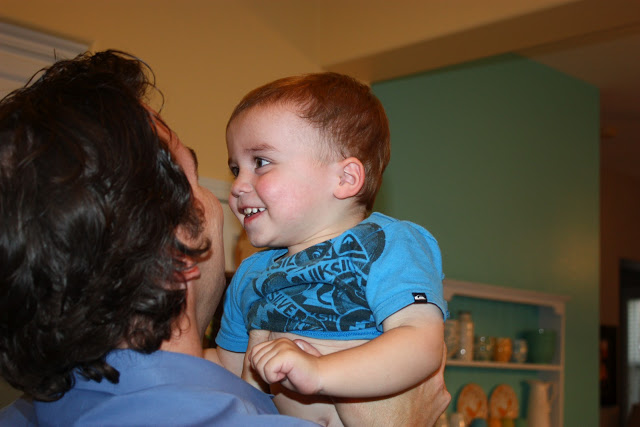 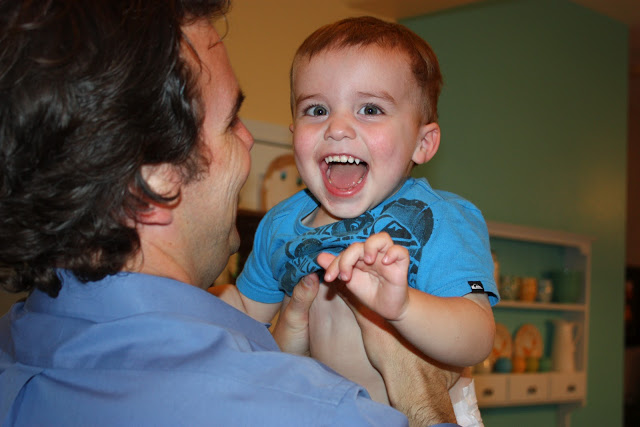 Daddy’s home!  This little guy gets so excited when his dad walks in the door.
(The feelings mutual little buddy). 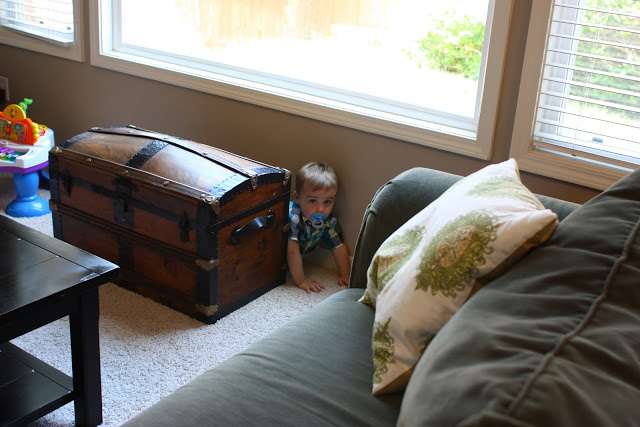 He also gets pretty excited for his nap.  You can tell from this picture of him peeking out of his hiding spot right after I gave him his binkie the other day.  It’s always a fun game of chase we play, but once I catch him, he admits defeat, rubs his little arm, and puts his head on my shoulder while I carry him to his room.  And the latest?  He just started blowing me kisses from his crib.  I melt into a puddle as soon as I close the door.  Then shortly after melting, I book it to get as much as is humanly possible done during those precious two hours.  Funny how I’m always so excited to put him down for a nap and have a break, but after about two hours, I start to miss him and I’m ready for him to wake up.  Then 10 minutes after he wakes up I’m wishing there was a nap #2 in my future.  :) 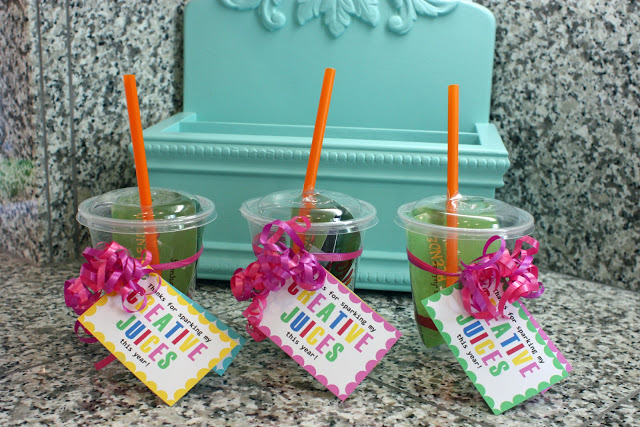 Just before school let out I shared all of the fun teacher gift ideas I rounded up on-line.  For the girls’ teachers I decided to copy Jen’s “Creative Juices”gift idea.  I totally spaced putting the candy in the cups, but it was still a fun way to jazz up some Jamba Juice gift cards.
I told the girls to get in the tub this evening and came upstairs 10 minutes later to find this: 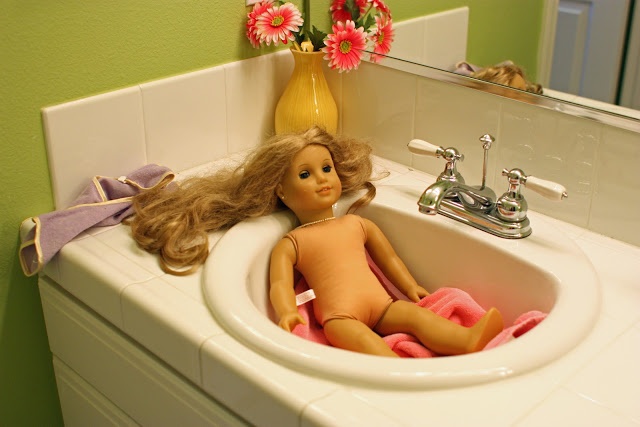 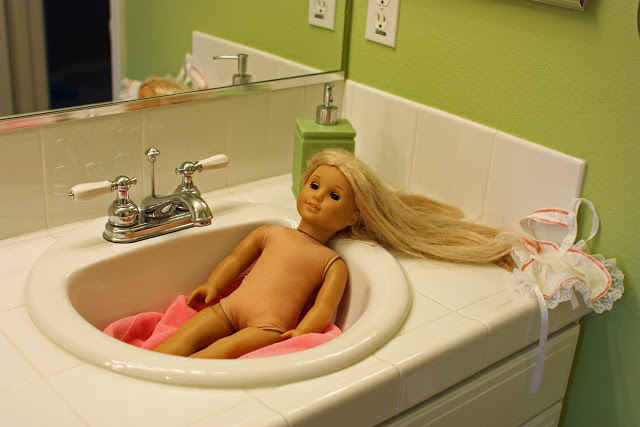 American girl dolls are taking their baths too!  I smiled when I saw the sink drains pulled up even though there’s no water .  I also got a kick out of their “robes” sitting next to them for when they get out.  So clever since they know these dolls can’t get wet.  Stuff like this seriously makes my day. 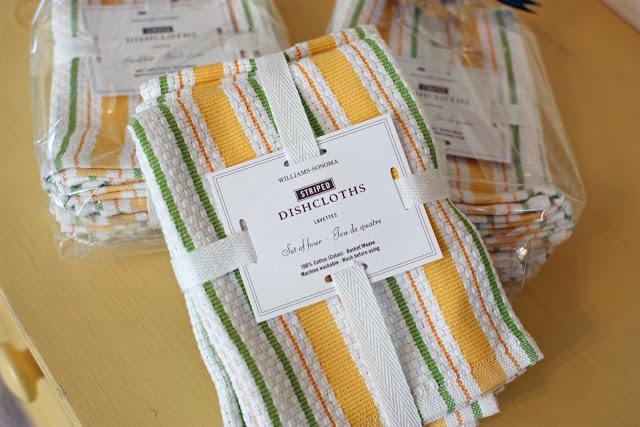 And while I’m on the subject of things that make my day, I am so in love with Williams Sonoma dish towels!  I bought these fun towels for a couple of friends’ birthdays last month and had to pick me up a set too.  They are so durable and just the right size for drying the counter or dishes.  Plus I love the colors for this time of year! 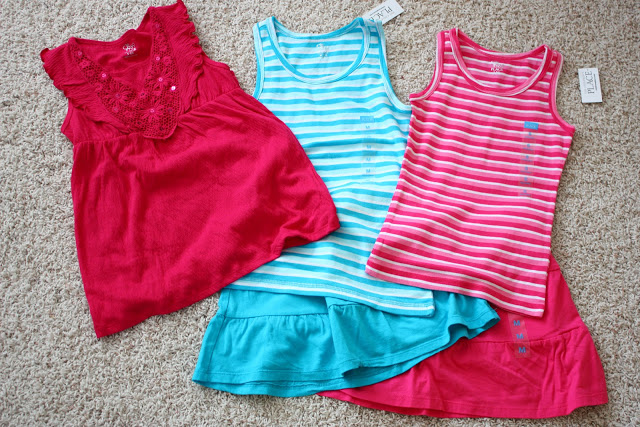 I also picked up some fun summer clothes for the girls.  These cute stripped tanks and solid skirts were $5 bucks each at Children’s Place!  Can’t beat that for comfy (Ellie approved) summer attire. 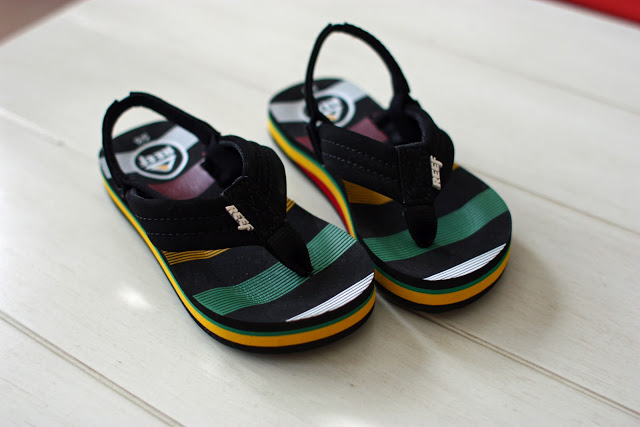 And how cute are these new Reefs for my little shadow?  He HATES them.  Can’t stand the feeling of something in between his toes.  It’s kind of hilarious when I put them on him.  He walks around funny for a minute and then sits down and starts trying to pry them off.  I’m sure he’ll get used to them at some point.  And he’s got time.  Flip flops work year round in our neck of the woods.

So what have I been up to with my girls taking over kitchen duty and Kole spending all of his spare time hiding from me and figuring out how to take off his new shoes?

I’ve been organizing of course.  :) 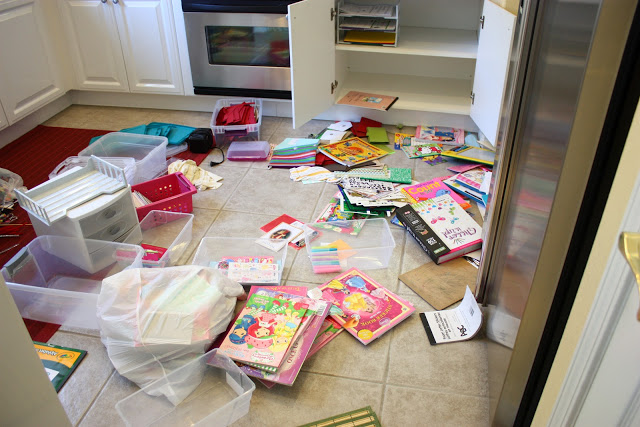 This was my kitchen at around 2:00 in the afternoon yesterday.
And I’m almost done with my little project!
“Afters” to share next week, but here’s a peek at the labels I used… 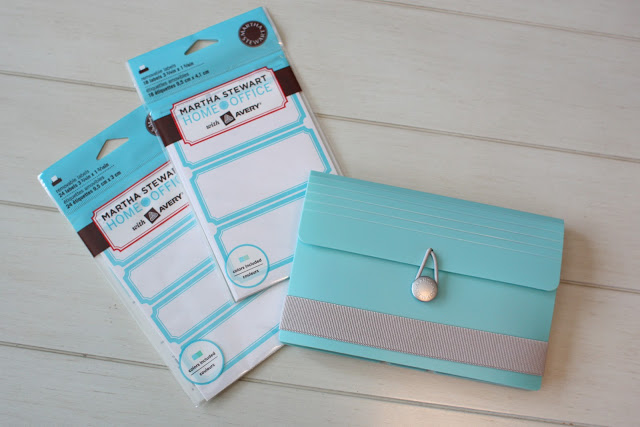 Is everyone else as in love with Martha Stewart’s new office supplies at Staples as I am?  I was in Staples today and for a minute while I was looking at all of her labels and paper organizers I think my heart stopped beating.  It quickly started again when Kole almost tipped the cart over trying to escape and Addison tried to “help” by screaming at him at the top of her lungs.  But I didn’t mind.  I was long gone in my happy place and walked around with a spring in my step the rest of the day picturing all of the organizing that is going to take place once I move into my new house.  Oh the joy! 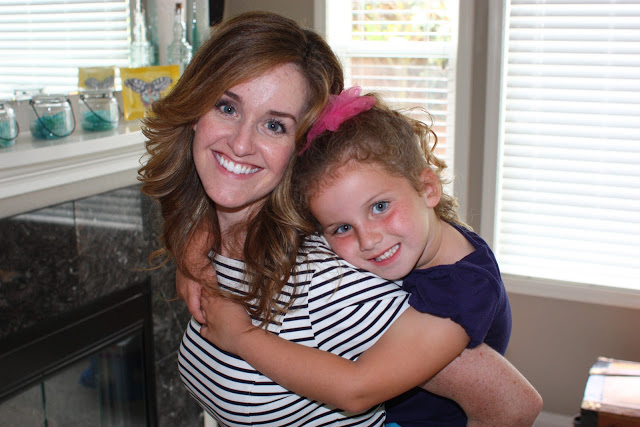 12 thoughts on “Tidbits on Thursday”