Skip to content
This is some sample text.
Learn More
Hi friends!  I started a Q & A post tonight but it is now well after midnight and I am nowhere near finishing it.  I clearly have more to say than I have time to say it.  As is always the case.  :)  It also didn’t help that I was trying to watch The Bachelorette at the same time and got totally sidetracked.  I can’t ever decide which is better entertainment.  That show and all of its nonsense, or my husband’s witty commentary during it.  Either way, it was an entertaining night to say the least and it kept me from finishing up my planned post.  So for now since I’m short on time I just wanted to quickly share my girls’ chore chart since several of you asked what chores I was having my girls do each day for their star charts.  A lot of charts are happening around here.  :) 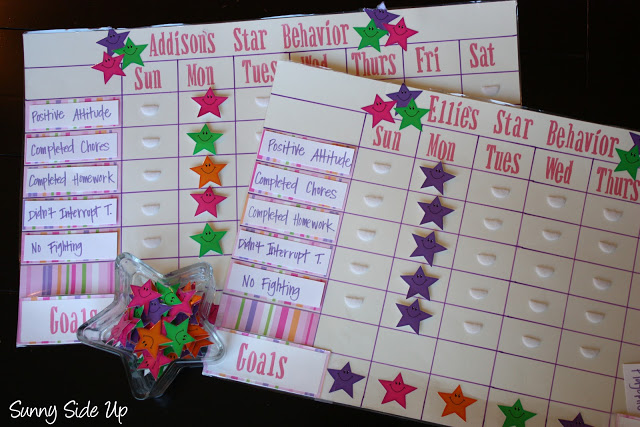 Two years ago when I had baby #3 it became painfully obvious how much I was babying my girls.  Suddenly I was too busy to do every single thing for them and they were clueless as to how to take care of themselves.  Little things like fix and clean up their own snack, run their own bath water, and put away their own clothes were too much for them to handle.  Why take care of yourself when mom always does everything for you?  So since then I have given my girls daily chores and I have tried to teach them how to be more independent.  I am my own worst enemy when it comes to this sort of thing because as you may have noticed by now, I’m a bit of a control freak.  Especially when it comes to keeping my house in order.  It has been a learning process for me to be able to “let go” and turn some things over to the girls even if it means things aren’t done as perfectly as I like them to be.  Kole has forced me to mellow!  It’s a good thing.  HE is a good thing.  :)
Anyway, on to the chore chart! 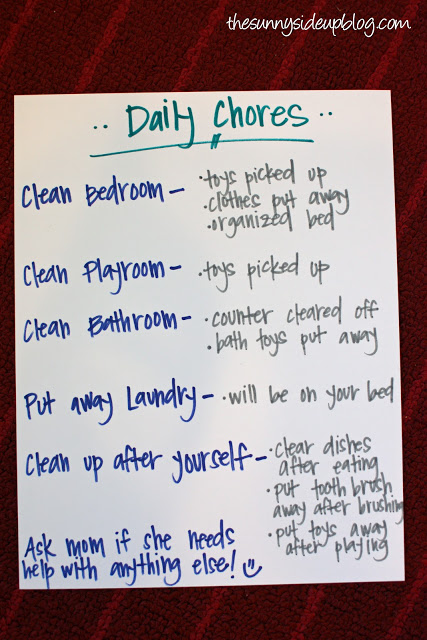 This is a simple list of chores I now expect my girls to do each day.  It hangs in their bedroom where they can easily see it.  My girls are 6 & 8 years old and it feels like just enough responsibility for them (and it works with our schedule).  At the end of the night we do a quick clean up before bed and they are always in charge of their bedrooms, bathroom, and playroom.  They know that if they do a better job keeping these spaces picked up throughout the day they will have less to do at night before they get to read stories with dad.  The girls also put away all of their own laundry.  Whenever I fold the clothes I just lay their clothes out on their bed and they put it away when they notice it.  I also added on the chart a few simple things we are working on under the category “clean up after yourself.”  I’m trying to teach them to be more mindful of taking care of the little things.  The constant little messes they make and just leave for someone else to clean up.  That someone always being me of course.  They also know to ask me if there is anything else I need help with.  Most days there isn’t because we run out of time and after picking up their rooms and doing laundry they are burned out, but every once in a while I have them help with other random chores… dusting, picking up the downstairs, and sweeping (that’s always a favorite).  I also do a lot of quick pick ups with the kids where I say “pick up 10!” and they have to pick up ten things off the floor and put them away as fast as they can.  Kids respond much better to chores when it feels like a game.  If we have quite a bit of cleaning to do upstairs at the end of the day I turn on music and we dance and sing while we clean.  It gives us all the extra boost of energy we desperately need at the end of the day.
Our chore chart is far from fancy, but the expectations are specific (my girls need specifics!) and it gets the job done.
**Update on the star charts.  Both of my girls got all of their stars last week and we have play dates with friends lined up this week to celebrate.  We also watched a movie together – The Incredibles.  The girls decided promptly after the show that the three of us are called The Freckle Girls and we all have super powers.  We do a “FRECKLE GIRLS… UNITE!” chant with hand motions that gets us pretty pumped up about saving the world.  One freckle at a time.
:)
xoxo, Erin
Share
Leave A Comment
Share The Post
Join the Conversation
Cancel reply