Skip to content
This is some sample text.
Learn More
So does anyone else have a Halloween hangover today?  I swore when I went to bed last night that today I wasn’t going to eat any more sugar.  Not ONE MORE piece of candy or chocolate.
Then I woke up and had peanut m&m’s for breakfast.
And now it’s after 10:00 in the morning and Kole and I are still in our pajamas.  The house is a disaster and we just can’t seem to get moving.  I think it’s going to take a while to recover from the last four days.
{Wrapping up Halloween 2011} 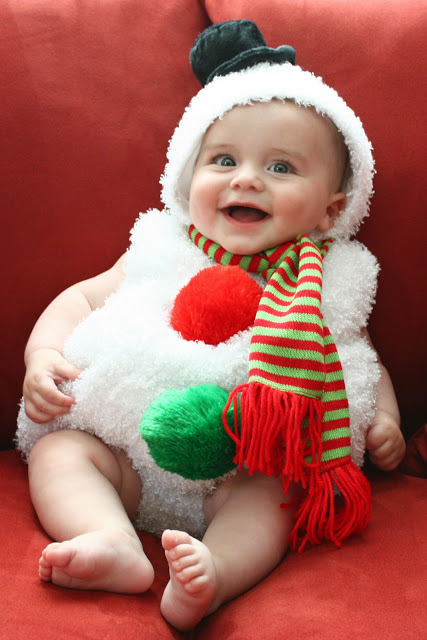 You may remember that last year for Halloween my little man was a snowman.  Well.  He {melted} my heart in that costume.  Literally.  And you know how I feel about Christmas. 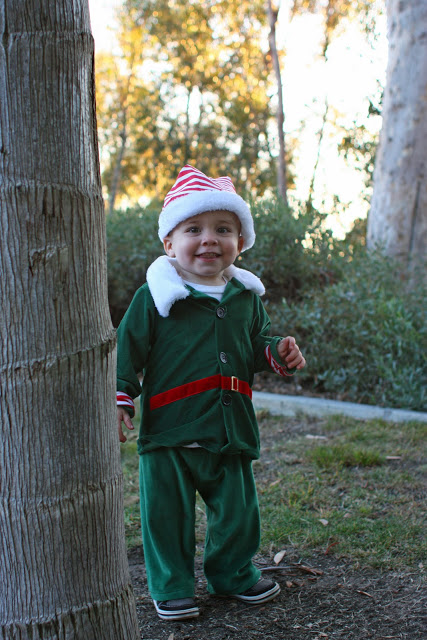 So when I saw this elf costume on-line I knew it was the one! 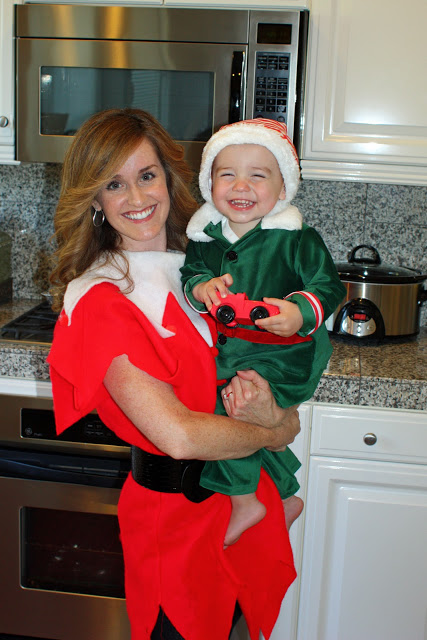 I too dressed up as an elf and Kole and I were Santa’s happy little helpers.  Can’t you just tell how happy we are!?  This picture of him cracked me up. 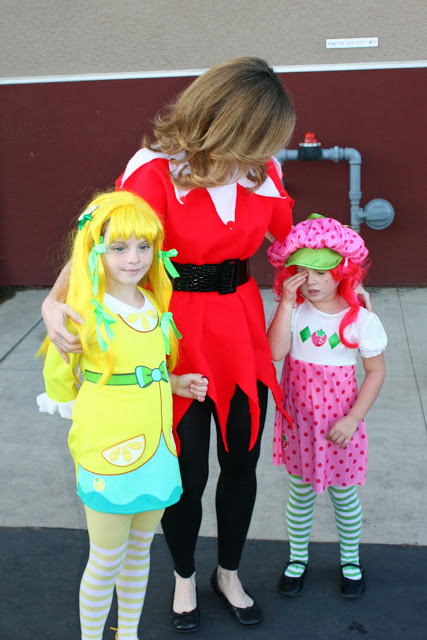 This was the only picture I have of my full costume.  I borrowed it from a friend and wore it last year too.  Nothing like a little Christmas cheer in October!  I think I was telling Addie not to rub her freckles off. 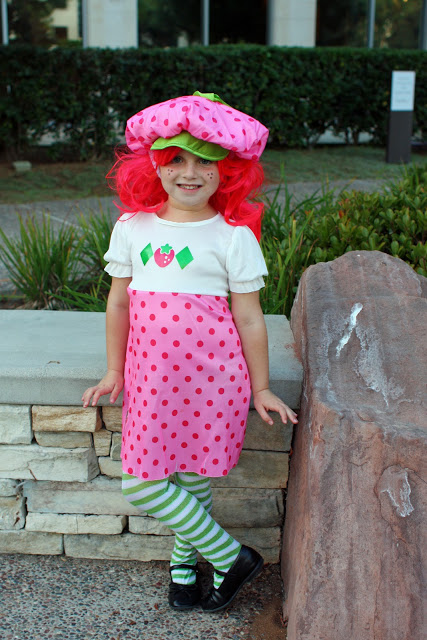 Speaking of my little Strawberry Shortcake and her freckles – she was such a doll this year.  LOVED her costume and was so excited to wear it. 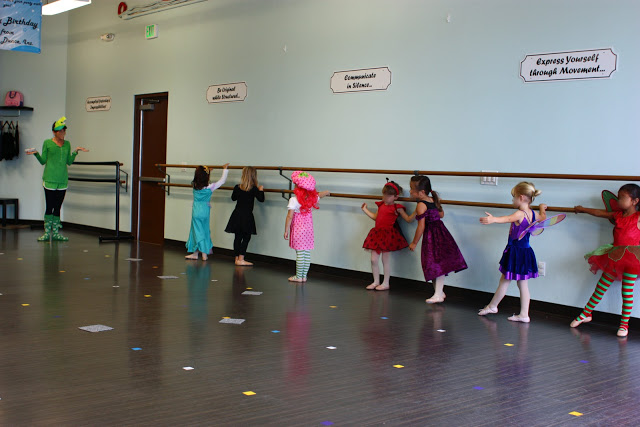 The festivities started last week when my girls got to wear their costumes to dance class and make up their own dance to perform.  Oh my word.  Those little ballerina’s were the cutest things ever!  We downloaded the Strawberry Shortcake theme song for Addie’s dance.  I may have to share the video some time.  It was adorable!  Then they did their usual warm-up and then the mom’s got to dance with them.  Addison and I  shook things up big time. 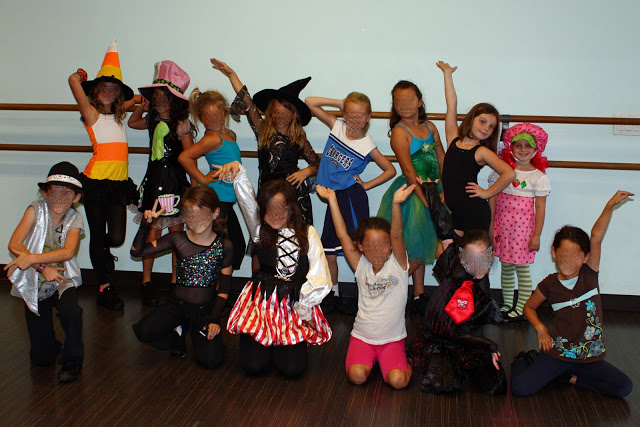 Then it was time for Ellie’s hip hop class where they too got to wear their costumes and perform.  Ellie loved her costume this year, but thought it was itchy (she thinks all clothes other than pajamas are “itchy”) so the second she was done performing she tore off the wig and changed.  Then the hip hoppers worked on some routines and Addison jumped in and joined them.  She wants to do everything her big sister is doing. 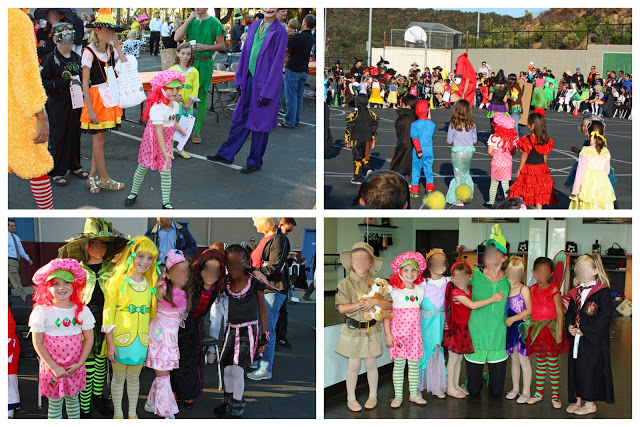 The girls had so much fun at all of the festivities with their friends.  I love their ages right now!  Everything is so magical. 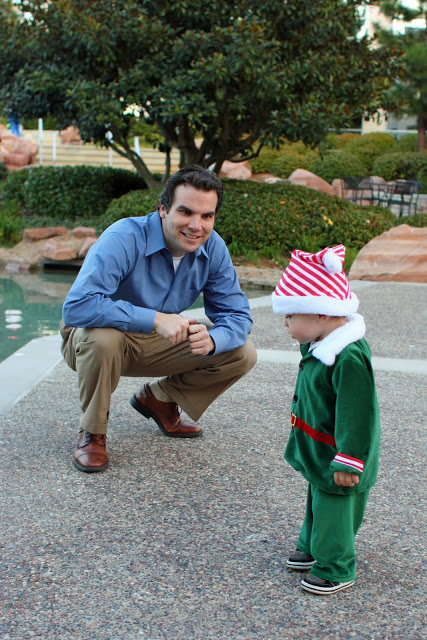 We had a lot of fun at Kenny’s office party.  His firm goes all out every year for Halloween.  I didn’t take a lot of pictures because there was a Haunted House for the kids and my girls must have gone through that thing over 20 times.  They came out the first time with wide eyes and said “that was SO SCARY mom!  Let’s do it again!!”  So we did.  Again and again and again. 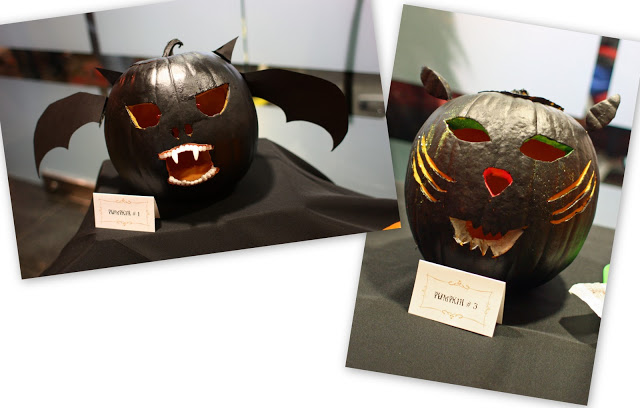 They always have a pumpkin carving contest and I loved the entries this year.  These two black pumpkins were pretty cool.  But my favorite? 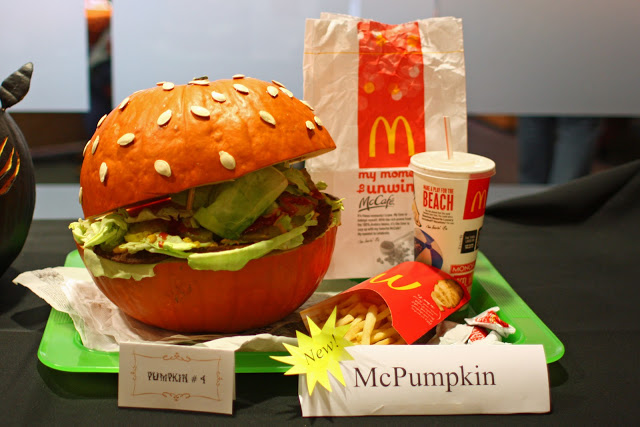 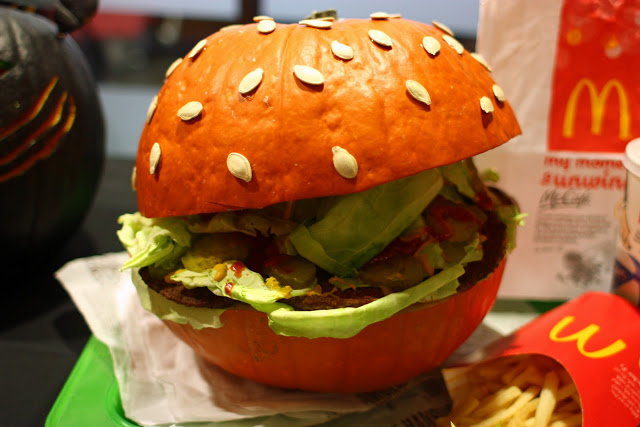 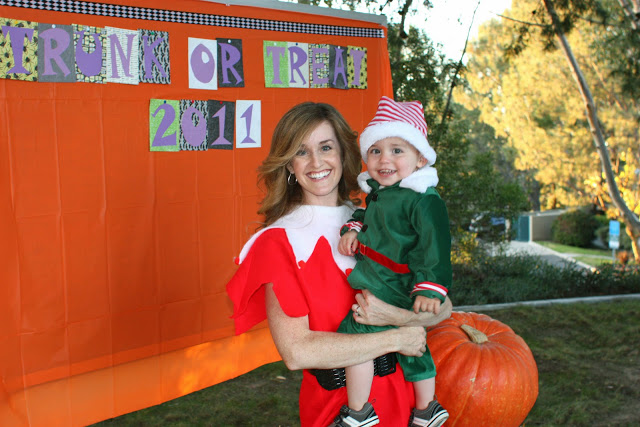 Kole and I at our church Trunk-or-Treat party. 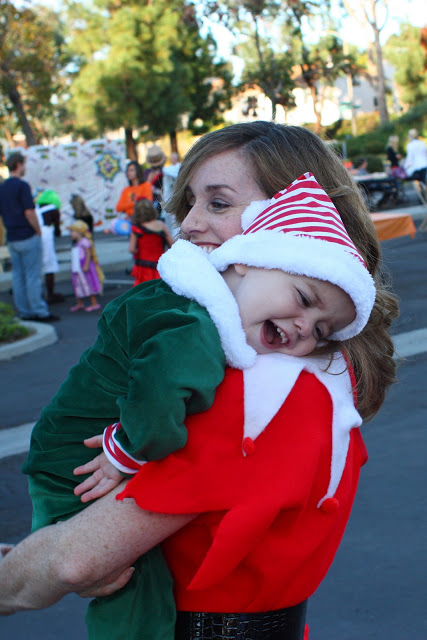 He was such a pill that night.  Wouldn’t let me set him down for the first hour.  Running away from me the second hour.  Santa wouldn’t have been impressed. 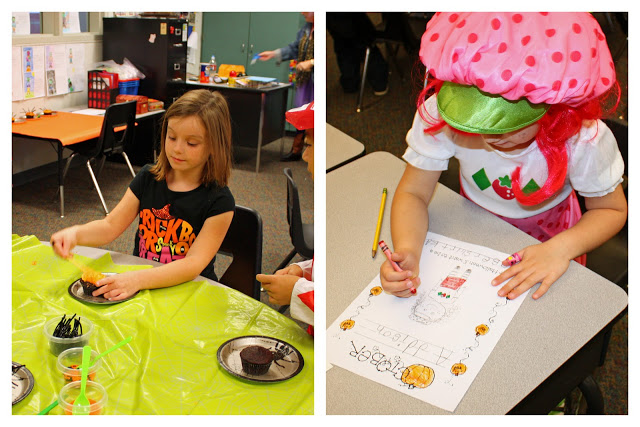 Girls at their class parties.  Ellie had her costume off the second the parade was over.   We both agreed that next year she is wearing her pajamas and being a “sleepover girl.”  I was able to help for a total of 2.2 seconds in each classroom because Kole had other plans for us.  Plans that involved me paying 100% of my attention to him and him alone. I have to admit, I’m pretty pumped that this was my last Halloween with an 18 month old.  There are some things about his age that I am just NOT going to miss! 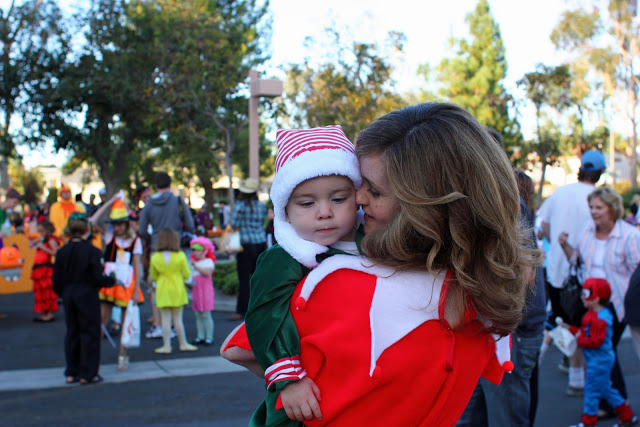 And other things I will miss.  Terribly.
What a mommas boy.  :) 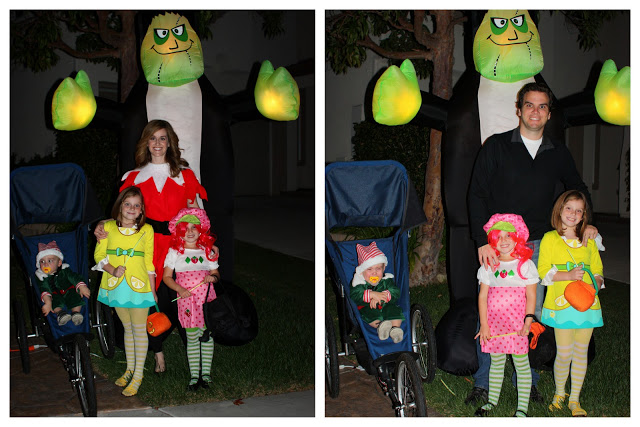 Trick-or-treating was a lot of fun.  Kenny took all three kids out while I handed out candy.  I had some fun Christmas magazines I was anxious to read, but I didn’t get to open one of them.  We had non stop trick or treaters for three hours straight!  I loved it though.  It’s my favorite part.  Especially seeing all of the little ones in their darling costumes who have practiced their “trick-or-treat!  thank-you! and happy halloween!”  Half way through the neighborhood Kenny brought Kole back to the house because he was running away and not having it in the stroller anymore.  Then every time I opened the front door to hand out candy he tried to escape so I finally just put him in his high chair, turned on Wonder Pets and loaded him up with enough food to last a life time. 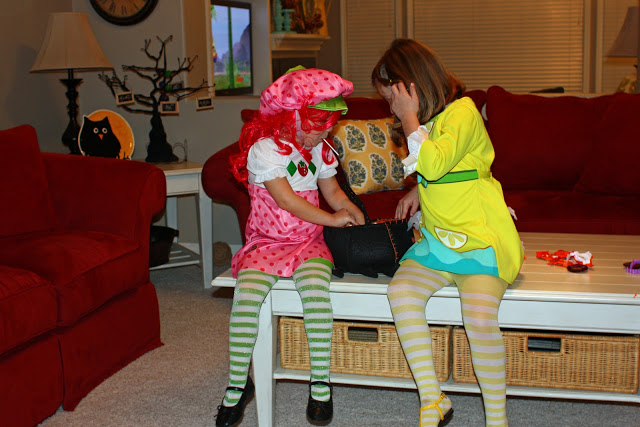 The girls with their loot!  Kids had a blast.  Another successful, yet slightly exhausting Halloween!
K.  Guess I’ll go get dressed now.  Back to reality.
On second thought.  Those Christmas magazines are still sitting on the table.  They seem to be calling my name much louder than the dishes sitting in my sink….
xoxo, Erin
Share
Leave A Comment
Share The Post
Join the Conversation
Cancel reply