Skip to content
This is some sample text.
Learn More
I’ve been doing a bit of organizing lately.  (I know – shock! right?)   One truth about organizing that has been ringing true in my house lately is that you have to keep up with the maintenance.  The areas I’ve been working on are areas that have been organized several times before, but because life got in the way they have been…well…trashed.  :) 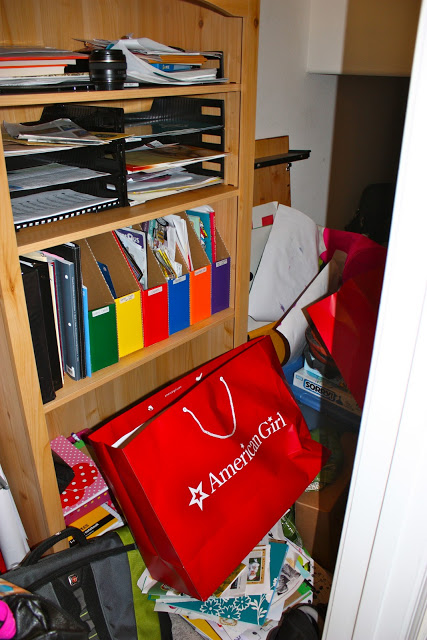 Our closet under the stairs that includes my paper organizing system became a disaster during December.  I had Christmas presents hiding there until Ellie discovered them.  They were quickly moved to Kenny’s office Santa’s workshop and the closet became a catch all for whatever I didn’t have time to deal with. 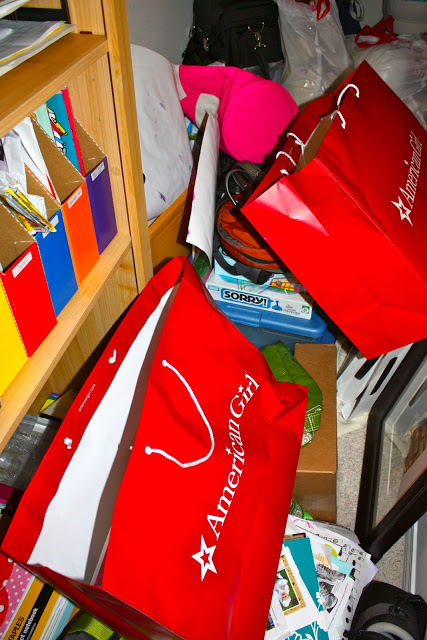 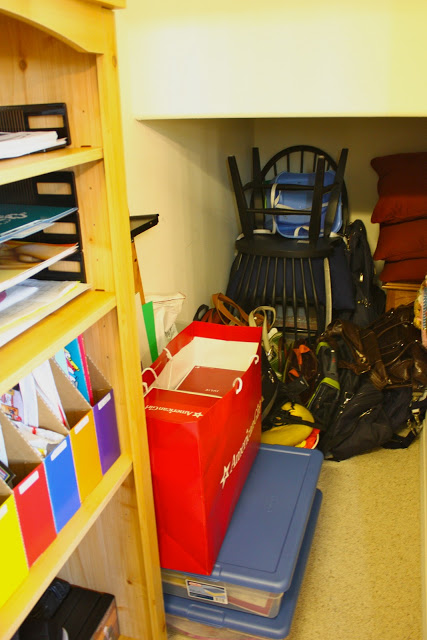 So I got things back under control. 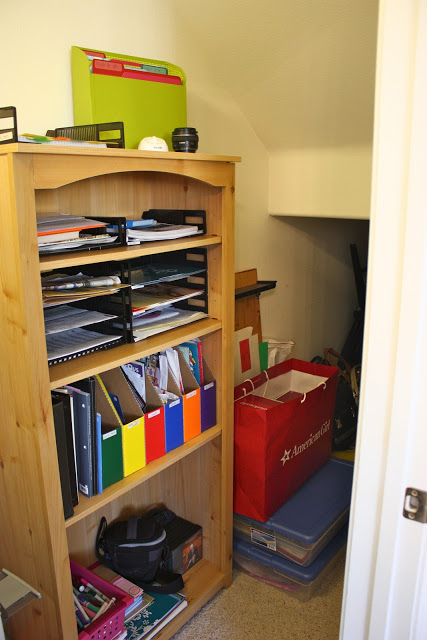 *note to self: I still need to go through receipts and coupons. 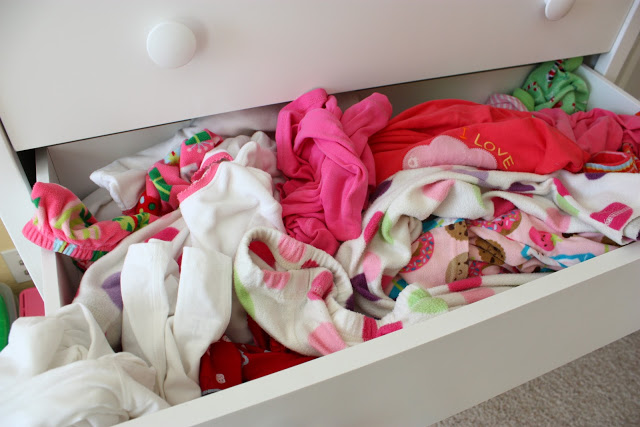 The girls’ drawers were starting to look like this again. 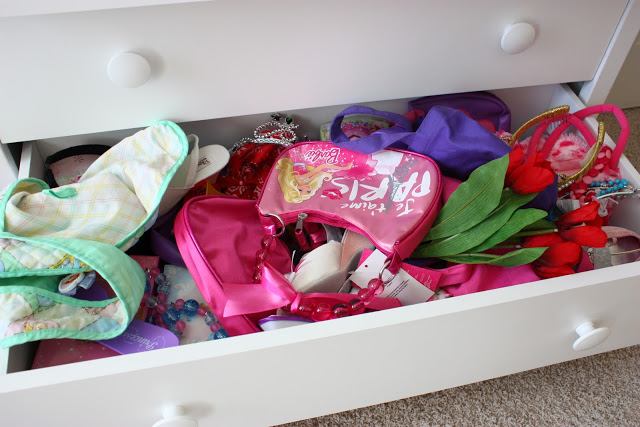 Plus with Christmas and Ellie’s birthday, the toy situation was getting out of control…again. 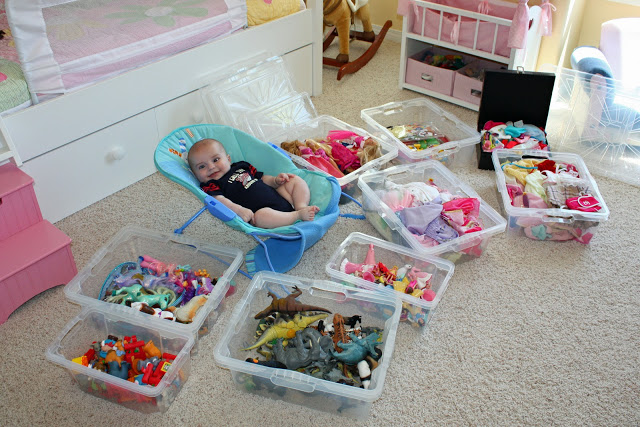 Remember last summer when I organized all the toys in these bins? 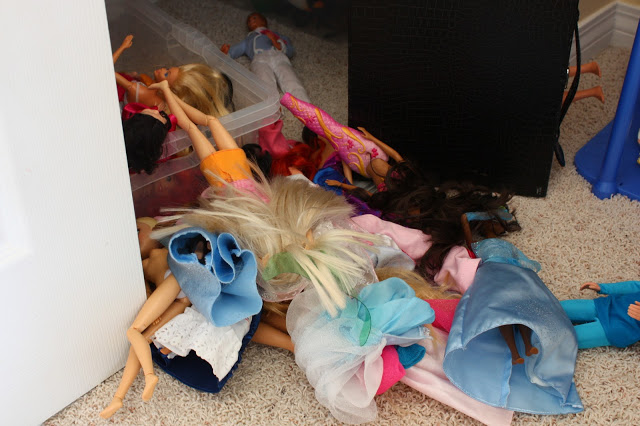 Well – the doll clothes and barbies were constantly pulled half way out of the closet and strung all over the floor.  It has been really bugging me the last few months. 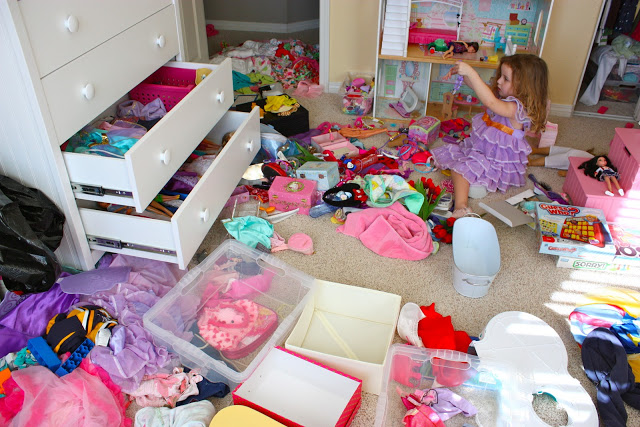 So one morning while Ellie was at school and Kole was napping, I enlisted a certain “Fancy Nancy” and  tore the girls’ room apart re-arranging things in a more functional way. 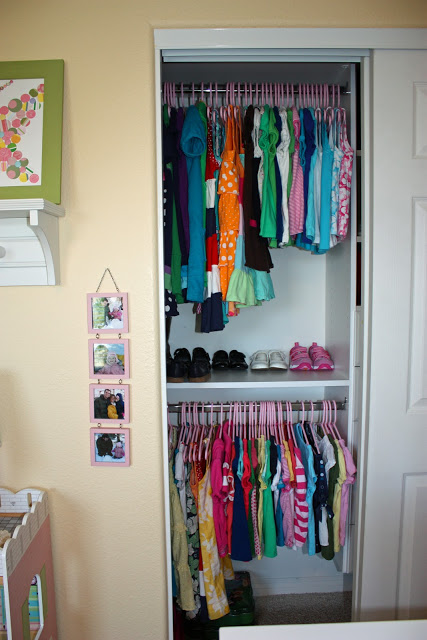 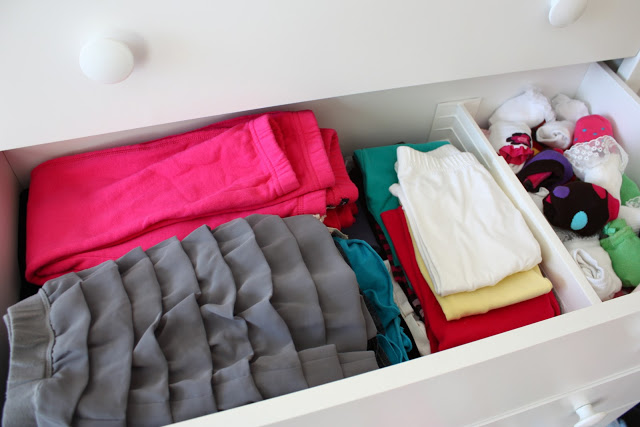 And the drawers looking like this again.  My girls actually do a pretty good job of keeping their clothes this way.  They are sectioned by skirts, pants, leggings, and socks.  Now each of my girls has one dresser drawer for clothes and the rest are for toys.  Toys are what they are getting into all day long so I wanted to move them to a spot that was easier to access and more accommodating.  That’s a nice way of saying THERE ARE TOO MANY TOYS IN THIS HOUSE AND THEY ARE DRIVING ME CRAZY!  Ahem…moving on. 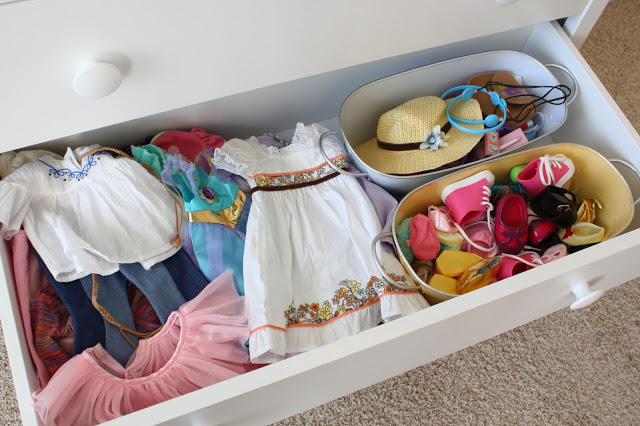 The bottom drawer now holds all of the doll clothes. 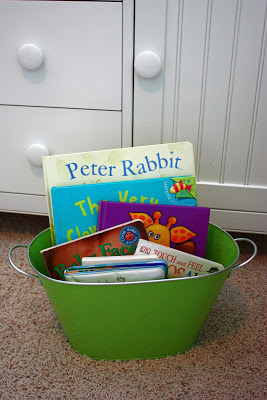 When I decorated Kole’s nursery I fell in love with these bins for books and diapers so I bought a few extras in different colors.  I knew they would be fun to use to organize something at some point. 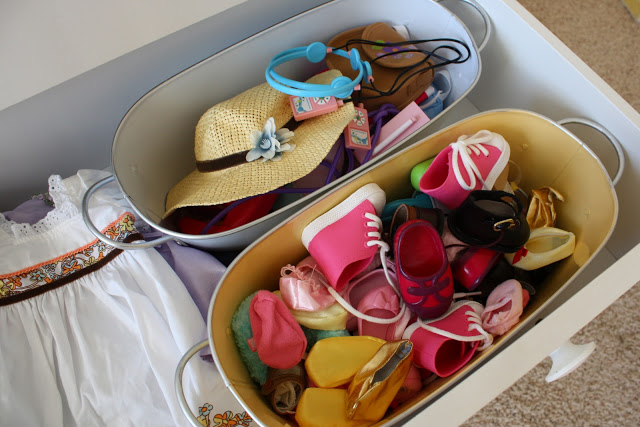 They are perfect for doll shoes and accessories.  I love the way they look in the drawer.  I also love that the dolls have their own plastic i pods! 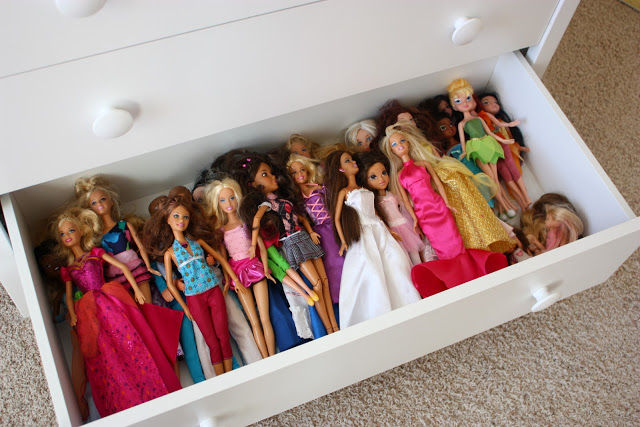 Then I used the whole bottom dresser drawer for barbies, Liv dolls, Moxie girls, and fairies.  (If you have little girls I’m sure you know all about Liv and Moxie dolls!)  Of course I know when I organize that things won’t be kept this perfect. 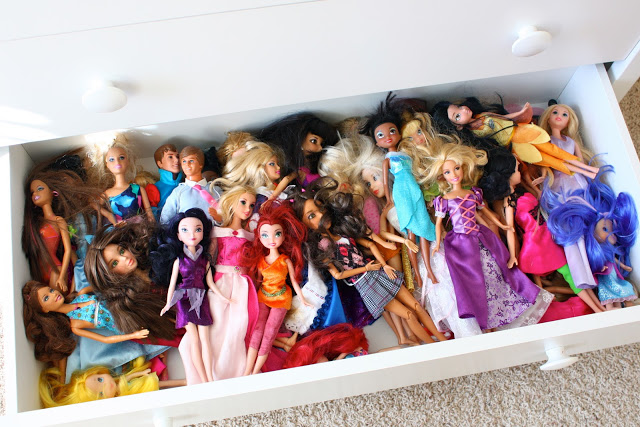 Here is a picture of the dolls a week later.  I can live with this.  A specific place for them that is easy for the girls to get to and easy for clean-up.  *note to self: do NOT buy these girls one. more. doll. 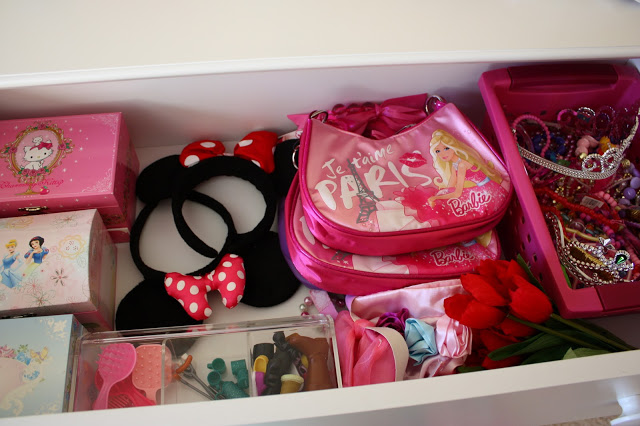 One drawer is just for random dress up toys.  I got rid of A LOT of this stuff…while Fancy Nancy was busy attending to her dog Frenchy.  Again, I know it won’t look like this next week, but with a lot less in the drawer they’ll at least be able to find what they’re looking for. 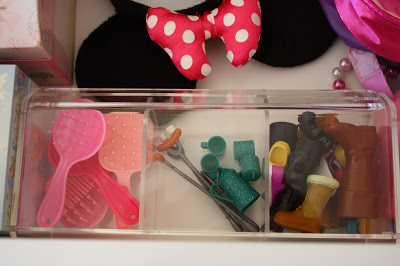 A fun little organizer from the Container Store.  We have to be so careful with all the little “stuff” that accompanies dolls now that Mr. Kole is putting any and everything in his mouth. 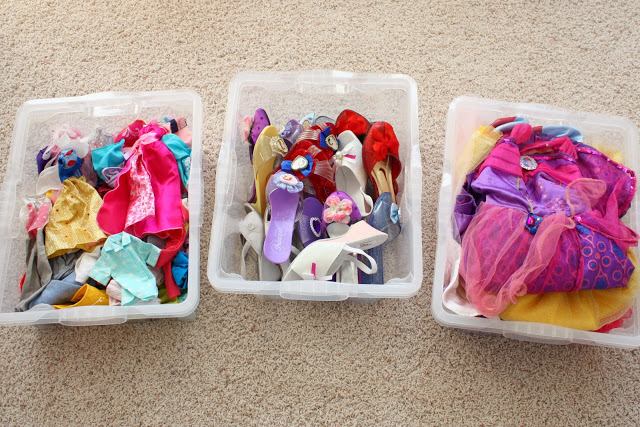 The bins that used to hold doll clothes and barbies are now used for dress-ups, shoes, and barbie clothes.    Things that are played with but not as often. 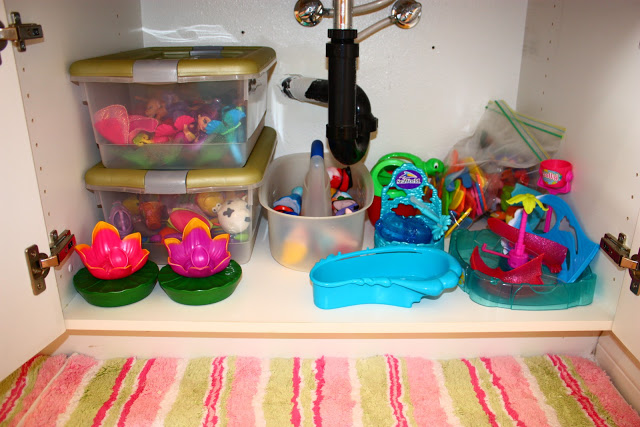 Another area I attacked…again…was the tub toys.  Above is the way they were organized in the beginning, but it was impossible for my girls to keep it that straight. 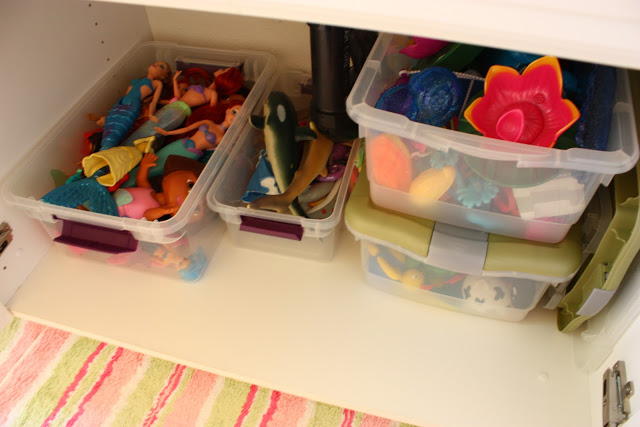 So my solution is to leave the lids off several bins.  Now it’s easy for them to grab a few toys before tub time and easy to put them back after.
Feeling much better about the minor changes that will make things easier to maintain.  This post made me happy.  The week ahead is off to a good start!  :)
xoxo, Erin
Share
Leave A Comment
Share The Post
Join the Conversation
Cancel reply