So the MAIN reason my parents were in town last weekend was to go with us to the Monday night football game. It was a huge game (Chargers vs. Broncos – mortal enemies) and we were all so excited to go. When we were in the ER Sat. night my husband’s question after “are the baby and Erin ok” was “can she go to the football game?” Since the game just required walking, sitting, a little standing, and some cheering I was good to go. (We joked that Kenny would have had me there on a gurney with an IV attached to my arm…probably not far from the truth) 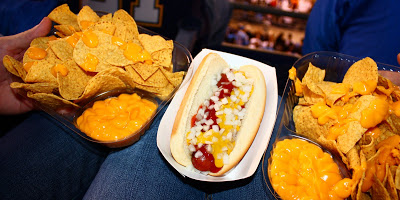 Doesn’t this look disgusting!? Processed, fattening, saturated junk. I can’t help it – this food always tastes SO good at football games. Plus it’s what the baby wanted and who am I to deny the little one a craving? :)

To my parents: thanks again for such a fun weekend and for all of your help and support. We love you two so much and the girls are already counting down to your next visit.
To the Chargers: who lost. Again. Clearly you guys DID NOT get my letter. If you had, you wouldn’t have allowed the Broncos that quick touchdown right at the start of the second quarter and you wouldn’t have allowed Philip Rivers to be sacked five times. You would have understood how badly I need a Charger win (especially with the holidays right around the corner) and you would have shown me some love. I’m going to have to blame this loss on the mail system which is completely unreliable and not nearly as cool as the human body. (see this post to clear up any doubts you may have) Your semi-fan, 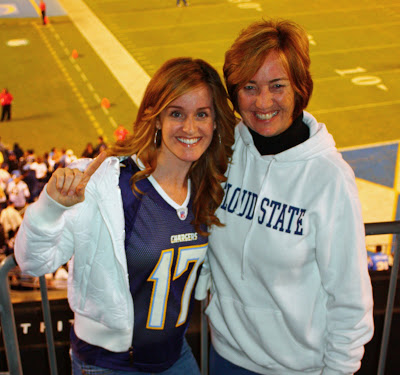 9 thoughts on “The Jersey still fits…”